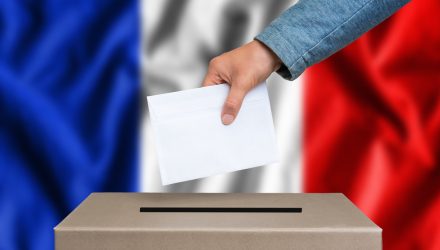 Marine Le Pen has been gaining traction in recent days, capturing 48.5% of voter intentions in an opinion poll of a likely runoff against Macron and marking the highest sentiment score among voters she has ever attracted.

“There’s been a bit of a wake-up call now that Macron has a very slim lead, and traders will start positioning for the risk of a tighter victory or even defeat for Macron,” Mohit Kumar, a strategist at Jefferies, told Bloomberg. “The election was not really on people’s radar given that it’s only really recently that Le Pen seems to have gained a lot of ground.”

The Harris Interactive poll for business magazine Challenges warned that a Macron victory that had previously almost been a foregone conclusion was now within the margin of error.

“We can clearly sense it in the business stream this morning,” Nathalie De Medina, a sales trader at broker Oddo Securities, told Reuters.

Observers pointed out that the selling pressure on Tuesday was particularly noticeable among areas that were vulnerable to a La Pen win.

“Look at Vinci and Eiffage; their underperformance is a casualty of Le Pen risk,” a trader told Reuters, underscoring the far-right leader’s plans to nationalize French highway operators.

Many investors see Le Pen as being generous in terms of public spending but also less business-friendly than Macron.

“Le Pen would likely be seen by markets as less reliable on public spending and economic competitiveness, and an unenthusiastic motor and/or unreliable partner for Germany and NATO at a crucial moment for Europe and the West,” NatWest economist Giovanni Zanni told clients last week.