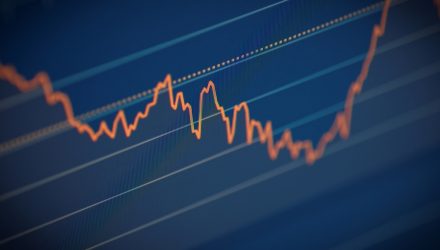 U.S. markets and stock exchange traded funds were higher on Wednesday after updated data on inflation was more or less in line with expectations but was still at its highest level in four decades.

Labor Department data revealed that the consumer price index rose 0.5% last month after advancing 0.8% in November, while in the 12 months through December period, the CPI jumped 7.0% to its highest year-over-year increase since 1982, Reuters reports. In comparison, economists forecasted the CPI gaining 0.4% in December and surging 7.0% on a year-over-year basis.

With inflation levels close to projections, many are hopeful that inflationary pressures may be peaking.

“The fact that the core rate came in just about in line with expectations suggests that we’re beginning to see some sort of a decline going forward,” Peter Cardillo, chief market economist at Spartan Capital Securities, told Reuters.

“I do think the markets are believing that inflation is on the cusp of peaking,” Darrell Cronk, chief investment officer for wealth and investment management at Wells Fargo, told the Wall Street Journal.

Meanwhile, technology stocks are rebounding after taking the brunt of the new year’s selling pressure. Technology and the growth style were previously under pressure on rising Treasury yields and a more hawkish Federal Reserve outlook.

Looking ahead, the earnings season will be kicking off in earnest, with big banks set to report their quarterly results.

“Earnings may exceed expectations and that is what is keeping investors active despite knowing that the Fed is going to start tightening in the next several months,” Eric Schiffer, chief executive officer of private equity firm Patriarch Organization, told Reuters. “You’ll also see less commentary on earnings calls referencing supply chain constraints this season.”