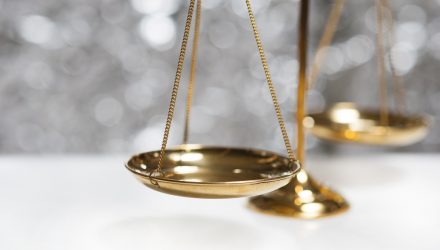 While a small number of stocks are taking on increasingly larger percentages of the cap-weighted S&P 500, RSP, which tracks the S&P 500 Equal Weight Index (EWI), keeps things truly diverse. None of its holdings exceed a weight of 0.29%.

One of the oft-cited reasons for equal weight out-performance is the size factor, meaning that funds like RSP often tilt more towards relatively smaller stocks. That’s not to say RSP is a small-cap ETF. It’s not. The average market capitalization of its components is $77.3 billion — deep into large-cap territory — but that’s below the $81.79 billion market value on the cap-weighted S&P 500.

“A comparison of US stock market decile portfolios makes the case for equal-weighting. The smallest 10% of stocks did much better than the largest 10%, according to data from the Kenneth R. French Data Library. Since this represents the size factor, those familiar with factor investing would hardly find this outcome surprising,” writes Nicolas Rabener for the CFA Institute.

Rabener notes that even when the 20% of smallest stocks are excluded, equal weighting topped cap weighting in terms of compounded annual growth rate (CAGR) on a back-tested basis from 1926 to 2021.

That could be a sign that, despite some critics’ assertions, RSP isn’t dependent on the size factor to outperform cap-weighted peers. Obviously, that’s a positive, but Rabener points out other benefits, though not specific to RSP.

Beyond that, history serves as a reminder regarding the benefits of being truly diversified and avoiding excessively large allocations to a particular sector or a small number of stocks.

“First, buying a cap-weighted index implies negative exposure to the size and value factors and positive exposure to the momentum factor. These exposures may not always be significant, but if there’s a repeat of the tech bubble implosion of 2000, they will matter,” concludes Rabener.

Speaking of sectors, the top five sector weights in RSP combine for about 65% of the fund’s weight compared to 75% in a cap-weighted S&P 500 ETF.