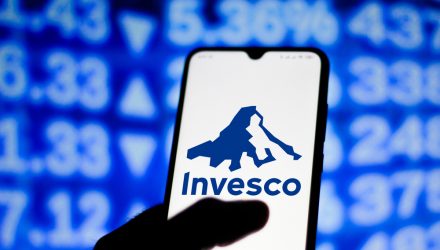 The Invesco S&P 500® Equal Weight ETF (RSP) is Invesco’s top ETF this year to date, as measured by net inflows.

With $32 billion in assets under management, RSP is Invesco’s second-largest ETF available to investors, trailing only the well-known Invesco QQQ Trust (QQQ) that manages $177 billion. Notably, RSP has surpassed both QQQ and the $12 billion Invesco S&P 500® Low Volatility ETF (SPLV) in year-to-date flows, taking in $3.24 billion in inflows, according to VettaFi.

QQQ, one of the most traded ETFs in the U.S., has an average daily share volume nearly 30 times greater than RSP. The fund has seen recent redemptions as investors look to capitalize on the summer’s rally and prepare for bleakness ahead, as the Fed on Friday warned that taming inflation would bring pain to households and businesses. QQQ has seen $743 million in net outflows over one week, bringing year-to-date inflows to $2.27 billion.

SPLV has become uber popular in the current economic environment, offering investors stability and reduced volatility. The fund has taken in $3.15 billion in year-to-date inflows and was ahead of RSP until recently. SPLV has seen $1.07 billion in net outflows over one week.

An equal-weight strategy, including RSP and the Invesco ESG S&P 500 Equal Weight ETF (RSPE), can reduce concentration risk by weighting each constituent company equally so that a small group of companies does not have an outsized impact on the index.

Historically, equal weight also outperforms. In the first two quarters of the year, the S&P 500 Equal Weight Index outperformed the S&P 500 by 2% each quarter and has outperformed over the trailing 12 months, as of the end of July, according to S&P Dow Jones Indices.

The diversification benefits and inherent tilt towards value are two reasons why investors favor equal weighting over market cap-weighted strategies.