You are at:Home»Portfolio Strategies Channel»Investors Bestowing Lots of Love on Bank Stocks 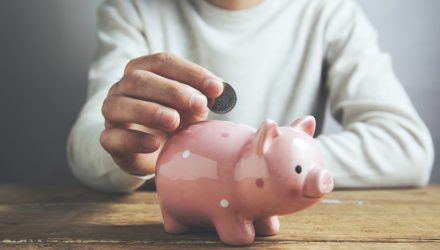 Leading up to and in the wake of the Federal Reserve’s first interest increase of 2022, which was delivered last week, investors were showing plenty of affinity for bank stocks and some of the related exchange traded funds.

As highlighted by a gain of almost 5% since the Fed boosted rates by a quarter of a point, the Invesco S&P 500 Equal Weight Financials ETF (NYSEARCA:RYF) is proving responsive to the newly hawkish U.S. central bank. RYF could be in for more upside because retail investors are piling into bank stocks.

“Retail investors have been net buyers of financial stocks for the last eight weeks, a bullish sign for the group and the longest such streak since 2008, according to Bank of America equity analysts,” reports Hugh Son for CNBC.

In simple terms, retail investors ramping up exposure to bank equities has the group sitting on four weeks of inflows — its best such streak since the worst days of the global financial crisis. That enthusiasm helped the equal-weight RYF erase a year-to-date loss, and the sector is now in the green since the start of the year.

“Retail interest in financial stocks has been a better predictor for performance than some professional investors, including hedge funds, according to the report. Another positive sign for future performance, they said, was that the bank’s Merrill Lynch financial advisors were also most bullish on financials, with 86% liking the sector, topping energy and industrials,” according to CNBC.

Potentially adding to the allure of RYF is the fact that despite the reputation of bank stocks being positively correlated to rising 10-year Treasury yields, professional investors, including hedge funds and mutual funds, appear to be under-allocated to the financial services sector.

“While retail investors and their advisors have shown enthusiasm for financials, the group is still underweight among big institutional players, including mutual fund managers and hedge funds. Mutual funds are 3% underweight the sector,” notes CNBC.

RYF holds 68 stocks, over 48% of which are classified as value names. None of the fund’s components exceed a weight of 1.62%.