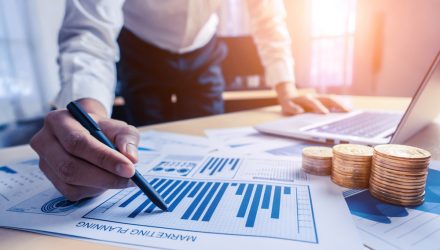 With technology and growth stocks struggling in the early part of 2022, investors are being treated to a case study in the advantages of equal-weight exchange traded funds.

As was widely documented, widely followed domestic equity benchmarks, such as the Russell 1000 Index and the S&P 500, entered 2022 more concentrated than they have been in years, meaning that a small number of stocks represents an outsized portion of those indexes.

These days, the stocks with the largest allocations in cap-weighted domestic equity indexes are primarily growth names, some of which are struggling this month. Investors can turn to equal-weight ETFs to avoid those issues.

History, including the bursting of the tech bubble in 2000, is a reminder of the potential advantages of equal-weight strategies, including EQAL.

“For example, the internet bubble of 1999-2000 was followed by a severe bear market. During this period, stocks from the technology sector gained particular prominence,” according to FTSE Russell research. “In its simplest form, equal weighting–an approach in which index constituents are given the same weight, rather than being determined by market values–is a way of addressing concerns about capitalization-weighted indexes’ potential security concentration risks in its largest companies.”

Historical research indicates the efficacy of equal-weighting stocks at times when a small number are commanding significant percentages of widely followed benchmarks, as is the case today.

“An equal weight approach can be particularly useful in the large-cap size segment (the Russell 1000® Index), where a few companies, such as Apple, may tend to dominate a capitalization-weighted index’s performance simply because of their size,” adds FTSE Russell. “While these outsized weights may benefit the index when large-cap stocks outperform, they can also hurt index performance when the reverse is true.”

EQAL is worth a look for another reason. Market observers are growing bullish on the prospects of value stocks beating growth rivals this year. The Invesco ETF allocates more than 41% of its weight to value stocks, compared to a growth weight of about 17%. In fact, value is showing signs of life of late.

“Value stocks are more sensitive to the strength of demand in the economy than growth shares, so they surged as the economy rapidly bounced back in response to Washington’s trillions of dollar in fiscal and monetary stimulus and the lifting of stay-at-home orders. Gains in growth stocks, which fell less as the economy stalled out in the spring of 2020, have been smaller,” reports Jacob Sonenshine for Barron’s.