You are at:Home»Portfolio Strategies Channel»Apple Might Be Making Case for Equal-Weight ETFs 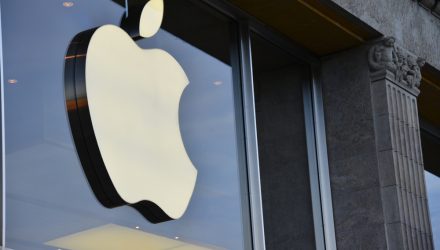 Apple (NASDAQ:AAPL) briefly eclipsed a market capitalization of $3 trillion on Monday, becoming the first company to do so, indicating that it’s a fool’s errand to bet against this stock.

While shorting Apple is clearly an operation in futility and ignoring the stock outright consistently proves foolish, the iPhone maker’s rapid acceleration to the upside also highlights the allure of equal-weight exchange traded funds, such as the Invesco S&P 500 Equal Weight ETF (RSP).

In fact, a case can be made that RSP is all the more relevant today because as Apple looms ever larger over a variety of widely cap-weighted benchmarks, index funds, and ETFs, the shares aren’t exactly inexpensive.

“At its current multiple of more than 31 times forward earnings, Apple is now at a 42% premium to the S&P 500 compared with its five-year average premium of only 4%,” reports Dan Gallagher for the Wall Street Journal.

That’s something to ponder at a time when, as of January 4, Apple commands 6.9% of the S&P 500 and 6.15% of the Russell 1000 Index. Conversely, no stock accounts for more than 0.24% of RSP’s lineup. In Apple terms, the diversification offered by RSP is particularly relevant because the company, while still highly innovative, is pursuing projects that take longer to bear fruit than past endeavors.

“Investors banking on the company developing the next big thing cheer rumors of future products like augmented-reality glasses and even an electric car. The latter especially seems a long way off, though, if it arrives at all,” according to the Journal.

RSP defrays another Apple-specific risk: volatility in iPhone sales. Indeed, sales of the dominant smartphone were strong in 2021, but that uptick came with a big uptick in subsidies from carriers looking to move more subscribers to 5G platforms. Carriers can’t keep that up forever.

“Those dynamics won’t continue. Analysts expect iPhone unit sales to rise by only 1% this fiscal year compared with 24% last year, according to consensus estimates by Visible Alpha. And analysts polled by FactSet expect Apple’s sales to grow by an average of only 5% annually over the next three years,” adds the Journal.

Bottom line: It’s preposterous to say that Apple is a “bad” stock. Performance indicates that Apple is a well-oiled machine, but it’s not a risk-free bet, and if valuation and product cycles become larger concerns for more investors, the stock’s prominence in cap-weighted funds could steer more market participants to RSP.