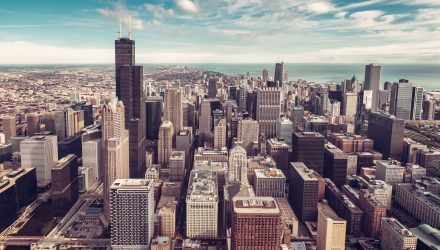 With growth stocks surging again in 2018, it is not surprising that mid-cap names are getting in on that act. For example, the iShares Russell Mid-cap Growth Index (NYSEARCA: IWP) is up nearly 13% year-to-date.

IWP, which tracks the Russell MidCap Growth Index, holds 415 stocks. Recently, the fund is adding to its gains, jumping 2.59% over the past month, but some market observers are concerned about mid-cap growth stocks.

“Most recently, the average mid-cap growth fund gained over 18% in the trailing one-year period whereas the average mid-cap value fund was up just 10%,” said Morningstar. “However, the significant drawdown in the most recent bear market illustrates the risk of these strategies. Mid-cap growth funds, on average, will tend to be more volatile than their value counterparts. These higher beta strategies will tend to outperform on the upswing, as seen recently, but lose more in a downturn.”

Growth ETFs are usually heavily allocated to technology and consumer discretionary stocks and that is the case with IWP. Those sectors combine for over 51% of the mid-cap growth ETF’s weight. Industrial and healthcare names combine for over 31%.