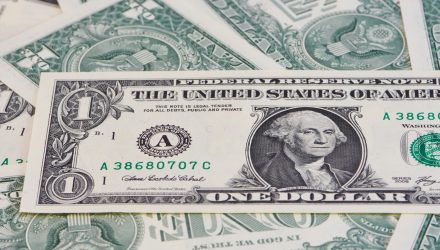 The Invesco DB U.S. Dollar Index Bullish Fund (NYSEArca: UUP), which tracks the greenback’s movements against a basket of major developed currencies, is coming off a solid performance in August, thanks in large part to the struggles of the Turkish lira.

UUP touched a new 52-week high last month, but has since retreated and now resides 1.40% below that high.

“Since that annual high close a couple of weeks ago, UUP has pulled back into its 50-day moving average, currently located at $25.11 — right in the same neighborhood where the ETF endured some choppy trading through most of the summer,” according to Schaeffer’s Investment Research. “The period between June 15 and Aug. 1 can be accurately described as a prolonged orbit around the $25 level’s gravitational pull, with UUP cycling above and below this level several times ahead of a modest gap higher on Aug. 2, when the currency caught a strong safe-haven bid from an escalation in trade tensions with China.”

“It’s hard to predict which international conflict, crisis, or monetary policy shift might spark the next major move in the dollar in the weeks ahead, but suffice it to say that a big break away from the $25 level’s orbit — whether higher or lower — could spark a large-scale unwinding on the part of those who have stacked up speculative bets and hedges at this strike price, and that such an unwinding could effectively accelerate the speed and magnitude of the underlying’s move,” reports Schaeffer’s.

Investors have pulled $15.34 million from UUP this year, according to issuer data.