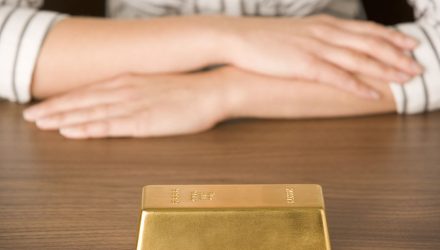 Uncertainty surrounding the Trump Administration and speculation that the president may not be able to accomplish tax reform, one of the centerpieces of his campaign, are among the factors fueling political uncertainty in the nation’s capitol.

That uncertainty is benefiting gold and the related exchange traded products, such as the iShares Gold Trust (NYSEArca: IAU). The ongoing political drama in the U.S. has also weighed on the U.S. dollar, which helped support the gold outlook. With traders remaining skeptical that this week’s Federal Reserve meeting would do much to alter the recent weakness, gold has maintained its recent strength.

“Gold is most correlated with real interest rates (in other words, the interest rate after inflation), not nominal rates or inflation. While real rates rose sharply during the back half of 2016, the trend came to an abrupt halt in early 2017. U.S.10-year real rates ended July exactly where they began the year, at 0.47%. The plateauing in real yields has taken pressure off of gold, which struggled in the post-election euphoria,” according to a BlackRock note.