You are at:Home»Alternative ETFs»Palladium ETFs See Departures as Metal Shines 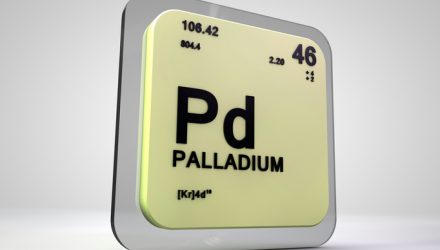 The ETFS Physical Palladium Shares (NYSEArca: PALL) is up 37.5% year-to-date, good for one of the best performance among commodities exchange traded funds, but that is not motivating investors to stick around.

Auto sales are expected to hit another record in 2017 for the eighth consecutive year on rising demand in emerging markets and from those in the U.S. seeking to replace older vehicles as stronger global economic growth and low gas prices help support consumer demand.

“More than $49 million has left the two main U.S. and European palladium ETFs — the ETFS Physical Palladium Shares and the ZKB Palladium fund — or roughly 15 percent of assets through Aug. 21 this year, according to data compiled by Bloomberg,” reports Bloomberg. “Across all ETFs, holdings of palladium have plunged from around 3.1 million ounces in 2014 to 1.6 million ounces today. And that’s while the metal has risen 38 percent this year to its highest price since 2001.”

Along with its safe-haven link in the precious metals space, palladium is also more sensitive to economic cycles and enjoys heavy industrial demand, notably out of the automobile industry where the precious metal is used as an autocatalyst to remove harmful emission particles.

“The explanation for the outflows lies in part in the scarcity of physical palladium and a robust borrowing market that has developed among users and speculators. Most ETFs that track stocks or bonds are fairly predictable in that flows typically correspond with performance. For funds that hold exotic assets like palladium however, quirks in the underlying market can often lead to more unpredictable patterns,” according to Bloomberg.