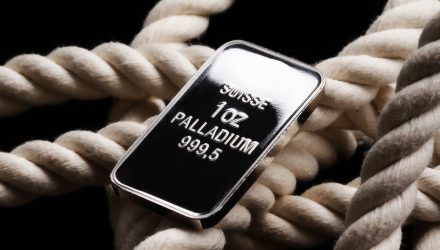 Palladium ETF Could Rally in 2022

Palladium-related exchange traded funds could regain their luster in 2022.

The Aberdeen Standard Physical Palladium Shares ETF (NYSEArca: PALL), which seeks to reflect the performance of the price of physical palladium, had an eventful year, hitting a record high in May before plunging to become one of the worst-performing major commodities of 2021.

Some market observers anticipate that the precious metal will rally next year as a revival in the auto sector boosts demand for the metal used in engine exhausts before the momentum behind electric vehicles sends prices into a long-term decline, Reuters reports.

Automakers utilize palladium in autocatalysts or exhaust pipes to remove harmful emissions. Over the years, increased auto sales and tightening emissions rules have contributed to a surge in palladium demand and shortages. The auto industry currently takes up around 85% of the world’s palladium supply.

While palladium prices touched an all-time high of $3,017.18 in May, prices have since plunged to around $1,800 after a semiconductor shortage forced automakers to cut back. The reduction in auto production has contributed to the palladium market’s first annual surplus in a decade, according to consultants Metals Focus.

“We therefore expect a big rebound in demand, which should also be augmented by stock replenishment in China after a year of extremely low imports,” Kavalis told Bloomberg. “The market will move back into deficit in the second half of next year, driving prices up.”

Garvey projected that automobile output could jump 15% in 2022 as the chip shortage eases, contributing to a roughly 500,000-ounce deficit in the palladium market and pushing prices back towards $2,500 or higher.

“Whatever price you see over the next 12-24 months, we will have seen the high of the cycle,” Citi analyst Max Layton told Reuters. “Palladium is the antithesis of battery materials. It likely has sequential demand declines from 2024 as far as the eye can see.”