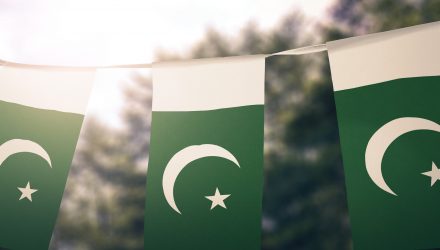 The Pakistan country-specific ETF strengthened Monday, with the benchmark KSE 100 Index recording its highest daily gain in two-and-a-half months, on expectations that the United Arab Emirates would increase investments into the South Asian emerging market.

The strong reaction was triggered by a visit from Sheikh Mohammed bin Zayed Al Nahyan, Crown Prince of Abu Dhabi and Deputy Supreme Commander of the UAE Armed Forces, whom was in Islamabad for a day-long trip on Sunday at the invitation of Prime Minister Imran Khan, Arab News reports.

“Sentiment improved over the weekend due to financial support from friendly countries and also due to the absence of selling from institutional investors. Healthy buying activity was observed across the board,” Misha Zahid, a stock analyst at Arif Habib Limited, told Arab News.

The UAE announced plans to aid Islamabad with $3 billion to support Pakistan’s balance of payments sheet. During the trip, the prince matched Saudi Arabia’s financial package of $6 billion for Pakistan as both countries offered $3 billion each in cash to stabilize foreign currency reserves, the Tribune reports.

Furthermore, other countries were negotiating the import of oil on deferred payments, which further bolstered investor confidence in this emerging market. Both the UAE and Saudi Arabia promised oil and gas supplies worth $3 billion each on credit.

“Investors were in agreement that the UAE’s $6.2 billion bailout package to support [Pakistan in terms of its] economic crises, Fitch Solutions’ analysis speculating stability in inflation, and the SBP’s key policy rate in FY2018-19, in addition to surging global crude oil price and investor speculations — ahead of year end earnings to be announced later this week – played a catalyst’s role in a record high close at the PSX,” Ahsan Mehanti, a senior stock analyst, told Arab News.