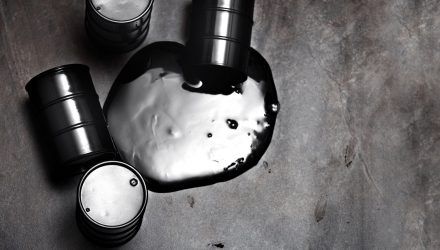 Oil prices continue sliding and scores of equity-based energy sector exchange traded funds are getting caught up in that tumble. That includes the iShares Global Energy ETF (NYSEArca: IXC).

IXC offers exposure to some of the largest companies that produce and distribute oil and gas around the world, such as Exxon Mobil, Chevron, Royal Dutch Shell, Total SA, BP Plc, Schlumberger and Conocophillips, among others.

The $1.38 billion IXC holds 72 stocks and tracks the S&P Global 1200 Energy Sector Index. The fund has plunged more than 13% just this month, extending its fourth-quarter decline to over 20%. Data indicate some investors are departing IXC.

“Two large blocks of the $1.4 billion iShares Global Energy ETF, or IXC, sold on Wednesday,” reports Bloomberg. “The first was 1.1 million shares worth $34 million at 10:37 a.m. in New York, and the second trade was just shy of 2 million shares worth $60 million about eight minutes later. The activity pushed IXC’s turnover for the day to $144 million, the most this month and about 10 times the daily average for the past year.”

Meanwhile, ongoing tensions and volatility in the Middle East between Saudi Arabia and Iran, along with higher-than-expected oil demand on a growing global economy, could support pricing over the short-term.