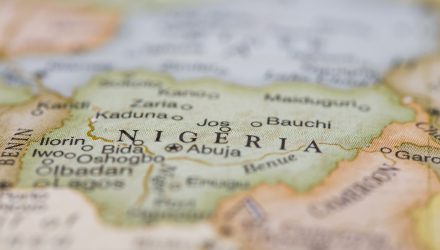 On the back of resurgent oil prices, the Global X Nigeria Index ETF (NYSArca: NGE) is up more than 18% this year. Nigeria is one of Africa’s largest oil producers and a member of the Organization of Petroleum Exporting Countries (OPEC).

Nigeria previously suffered through a downgrade from ratings agency Standard & Poor’s and the central bank’s decision to abandon its currency peg. The actions may be traced back to the extended weakness in oil market, which the country relies on with its heavy exports. However, the stabilizing oil prices are beginning to help support the economy. Nigeria is classified as a frontier market by the major index providers.

“Net foreign inflows to Nigerian equities totaled 337 billion naira ($940 million) last year, the first time flows have been positive since at least 2013,” reports Bloomberg. “December was the best month since Bloomberg started compiling data at the beginning of 2014, with net inflows of 140 billion naira, signaling a switch in sentiment toward equities in Africa’s biggest oil producer.”

The global market has suffered through a supply glut, but the Organization of Petroleum Exporting Countries and its allies have taken steps to rein in the oversupply. Recently, the United Arab Emirates, Saudi Arabia and Venezuela all reported lower monthly output.