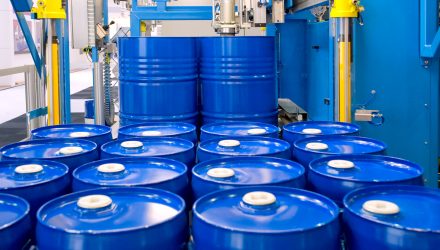 Although U.S. oil output is reaching record levels, surpassing production in some countries that are members of the Organization of Petroleum Exporting Countries (OPEC), some market observers believe crude will continue rallying.

The United States Oil Fund (NYSEArca: USO), which tracks West Texas Intermediate crude oil futures, surged more than 3% yesterday on volume that was well above the daily average, bringing its year-to-date gain to over 20%.

Earlier this week, crude jumped above $70 per barrel “after the State Department ordered allies to halt their imports from Iran by November. This tightens supply heading into the second half of the year and into 2019; given these conditions, the door is now open to $80 per barrel,” reports CNBC.

Recently, OPEC members and participating non-members announced a deal to raise its output by about 600,000 to 800,000 barrels per day.

Saudi Arabia, the largest OPEC producer, actually wanted to increase by about 1 million barrels per day to take advantage of higher prices.

“Several members are unable to add output, and that means only something in the ballpark of an additional half a million barrels per day will actually come online next month,” according to CNBC.