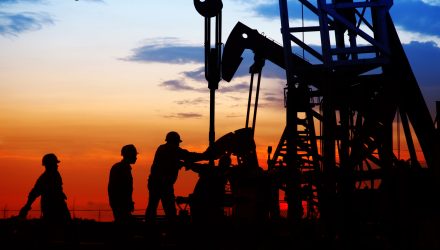 “The API inventory data published after close of trading yesterday are lending buoyancy to prices this morning,” analysts at Commerzbank said in a note. “Thus, the official inventory data this afternoon are also likely to show a more market inventory reduction, which would see the zigzag course followed by U.S. crude stocks in the summer months continue.”

Crude oil has recently found support on renewed trade talks between the U.S. and China – China previously stated it would cut down on U.S. oil imports due to the escalating trade war.

Related: A Core Midstream Energy ETN That T. Boone Pickens Would Be Proud Of

Additionally, the looming U.S. sanctions on Iran’s oil industry are expected to cut down on the Middle Eastern country’s exports. President Donald Trump pulled out of an agreement to curb Iran’s nuclear program in May, which reopened plans to impose sanctions on the Islamic Republic.

While oil prices initially popped on the sanctions outlook, the Organization of Petroleum Exporting Countries and its allies began increasing crude output after capping production for more than a year.