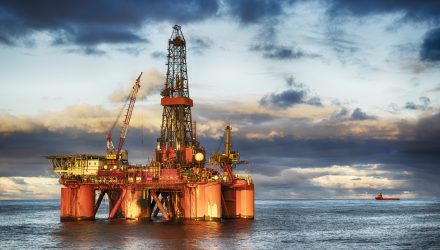 Oil ETFs Can Bounce Back Before Year End

The third quarter has not been kind to oil prices. Since the start of the current quarter, the United States Oil Fund (NYSEArca: USO), which tracks West Texas Intermediate crude oil futures, is off more than 5%, but some oil market observers believe crude can rally before the end of 2018.

Analysts at Commerzbank said the report of lower output from the cartel’s biggest oil producer have “lent support” to prices. Furthermore, the markets widely believed that Saudi production rose in July since OPEC and its allies agreed in late June to increase crude output in July after capping output for more than a year.

Potential supply disruptions have placed upward pressure on the price of oil in addition to the U.S. initiating its first round of nuclear sanctions against Iran today–a move that confirms the United States’ intentions to interrupt the Iranian economy in order to reach a more favorable nuclear deal. Furthermore, the notion that China can simply purchase more oil to make up for the reduction in Iranian oil purchases was rebuffed.

“A bearish inventory report earlier in the week pushed oil down to its lowest level since June, but crude bulls still have reasons to feel good. For instance, it’s easy to forget crude oil is still trading near multiyear highs, with a gain of 9 percent year to date and 40 percent in the last 12 months,” according to CNBC.

Other factors contributing to oil’s surge this year was the U.S. exploring the possibility of tapping into their emergency reserves to stymie disruptions in oil supply, notably the slashing of Iranian oil imports. Furthermore, news broke that two Saudi Arabian oil tankers were attacked by a group of Iran-backed Yemeni rebels over a week ago, putting more upward pressure on oil prices.

“During this seasonally weak time for crude, investors should look to buy pullbacks; the technical picture should support this strategy,” reports CNBC. “There is tremendous support from $62.50 to $64.50 per barrel, and oil should be positioned to rally back up to between $70 and $80 per barrel later this year. The key level to the downside would be $62.”

Investors have added $21.65 million to USO this quarter.