You are at:Home»Equity ETFs»Nigeria ETF Surges in Anticipation of a Return to Growth 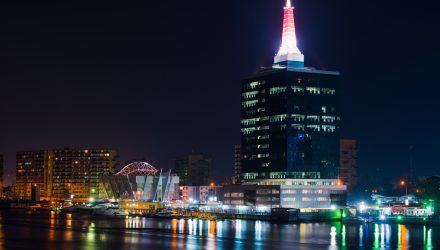 Nigeria ETF Surges in Anticipation of a Return to Growth

A financial expert with FXTM, Lukman Otunuga, argued a lot has changed for the better since February 2017 due to the positive moves of the Central Bank of Nigeria, reports Michael Ogwu for All Africa.

“The CBN implementation of the NAFEX window has improved liquidity even though a full solution has not been found,” Otunuga told All Africa. “What I have found is that the government has learnt its lesson from the 2017 budget and the 2018 budget estimates have come in more realistic with oil price at $45 and the exchange rate at N305. What I am a bit worried about is that in the third quarter of 2017, our oil production was at two million barrels. We will see OPEC ask Nigeria to cut production from the current level to 1.8 million barrels. If that happens, we will be 500,000 barrels down, and that will have an impact.”

Nigeria previously suffered through a downgrade from ratings agency Standard & Poor’s and the central bank’s decision to abandon its currency peg. The actions may be traced back to the extended weakness in oil market, which the country relies on with its heavy exports. However, the stabilizing oil prices are beginning to help support the economy.