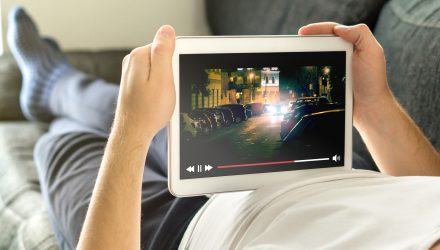 Last week, Netflix (etftrends.com/quote/NFLX) posted better-than-expected third quarter results with a jump in subscribers and in an effort to maintain its momentum, the video streaming giant plans to offer $2 billion in junk bonds to fund new programming.

The Netflix bond offering will be issued in dollars and euros, and will effectively bring the company’s debt load past the $10 billion mark. Nonetheless, its market value has risen over 70% this year to around $140 billion.

“To me it feels a bit like a win-win situation,” said John McClain, a high-yield money manager at Diamond Hill Capital. “You’re buying the highest-quality, high-yield business at yields that are fairly close to the overall market. It’s low-cost funding for them, especially relative to the cost of issuing new equity.”

Netflix’s announcement to tap into the junk bond market comes just a few days after Uber Technologies Inc. raised funds via the high-yield bond market through a private placement. Per Bloomberg, demand for high-yield debt “has been spurred by the worst supply shortage since 2008, according to JPMorgan analysts, and the higher demand kept a lid on relative borrowing costs even as the Federal Reserve hikes interest rates.”

Junk bonds or high-yield bonds have long been considered investable assets that make the majority of investors turn the other cheek with their below investment-grade debt, but for savvy investors, treasures can by had by sifting through this mass of junk bonds. As opposed to allocating investment capital directly into junk bonds, ETFs can used for high yield exposure to these bonds, such as the iShares iBoxx $ High Yield Corp Bd ETF (NYSEArca: HYG) and SPDR Blmbg BarclaysST HY Bd ETF (NYSEArca: SJNK).

HYG tracks the investment results of the Markit iBoxx® USD Liquid High Yield Index, which is comprised of high yield U.S. corporate bonds that have less than investment-grade quality. Investors who have been able to forego the credit risk have seen total returns of 6.74% the last three years and 2.50% the past year based on Yahoo! Finance performance figures.