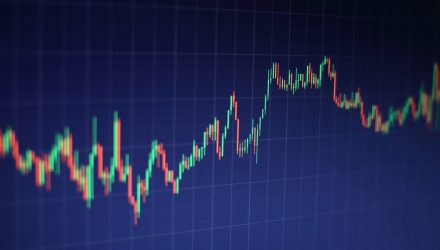 Natural Gas ETFs Plunge on Warming Weather, But Russia Is a Wild Card

Natural gas futures and related exchange traded funds plunged on Monday on a warming transition to spring weather, but a potential conflict between Russia and Ukraine, along with retaliatory sanctions, could disrupt the natural gas markets.

Bespoke Weather Services noted that the weather outlook “jumped notably to the warmer side” over the weekend, based on both the American and European models, Natural Gas Intelligence reports.

“The main culprit is a shift toward a less favorable pattern on the Pacific side for delivery of cold air, something we had been watching for given the changes in the projected tropical forcing patterns, but it took longer for models to resolve this connection than expected,” Bespoke said in a note to clients.

The weather pattern “could evolve even warmer” heading into the final week of February, “with any colder risks moving more into the western half of the nation, more consistent with a typical La Niña base state,” Bespoke said. “Recent model volatility keeps confidence at average, though our lean is that this directional change is correct.”

However, supply disruptions could help support natural gas prices if Russia takes military action in Ukraine. Europe’s energy supply is in the hands of Russia, which could shut off natural gas exports in retaliation for U.S. and European sanctions. While a complete shut-off is unlikely since it is mutually unfavorable, Moscow could decide to withhold gas sent through pipelines crossing Ukraine, which amounts to about a quarter of its total supply to Europe, according to the Associated Press.

“I think in the event of even a less severe Russian attack against Ukraine, the Russians are almost certain to cut off gas transiting Ukraine on the way to Germany,” former U.S. diplomat Dan Fried told the AP.

Meanwhile, in the U.S., suppliers could increase liquefied natural gas exports — over 10% of gas produced in the U.S. last year was exported, according to Clark Williams-Derry, analyst at the Institute for Energy Economics and Financial Analysis. While gas prices spiked in January due to weather-related demand, the Russia uncertainty also added to a geopolitical premium.

“Russia is disturbing European gas markets, with the U.S. talking about exporting basically the next ‘Berlin airlift’ for natural gas to Europe,” Derry told the AP.

Senior E.U. and U.S. officials have already stated their intent to increase cooperation over LNG ahead of any potential Russia disruption to gas supplies, according to a draft of a joint statement seen by Reuters.

“The EU and the United States intend to work together so that global liquefied natural gas markets have the capacity to provide additional and diversified supplies in case of pipeline gas disruptions in the short term,” according to the draft, which could change before it is published.