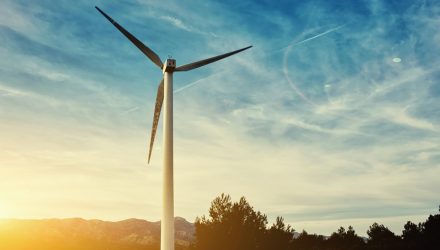 Along with solar, wind energy is one of the dominant forms of renewable energy. It’s also one of the most accessible for investors, and exchange traded funds make it even easier to grab broad-based wind equity exposure.

The First Trust Global Wind Energy ETF (FAN) is one of the premier names among ETFs with wind holdings. FAN, which debuted in June 2008, follows the ISE Clean Edge Global Wind Energy Index. While the wind ETF is lower by almost 9% year-to-date, that could be an opportunity for patient investors to get involved.

There remains notable long-term opportunity in wind investing because this form of renewable energy is one of the cornerstones of the Biden administration’s clean energy agenda, and policymakers are spending to that effect.

“The U.S. has a 30.7-GW pipeline of offshore wind projects, enough to meet President Joe Biden’s target of 30 GW by 2030, according to an S&P Global Market Intelligence analysis,” according to S&P Global Market Intelligence. “But the Biden administration faces a time crunch in reaching the goal: By 2025, the U.S. will have 4,733 MW of operating offshore wind capacity if all projects are built on time, the data show. Another 16,218 MW of capacity is scheduled for completion between 2025 and 2030, when the U.S. will have 20,951 MW of operating capacity.”

FAN is a pertinent play on this front because its 48 holdings are spread across the wind energy ecosystem, including operators of wind farms, wind turbine manufacturers, producers of wind power, and companies that make machinery and products used by the wind industry.

That depth is important because, in the coming decades, trillions of dollars are forecast to be spent on decarbonization efforts and clean technologies. With wind being a favored renewable source of developed markets, such as Europe and the U.S., FAN could benefit as renewables spending soars.

“European companies have maintained dominance in the U.S. market. The 10 largest developers by project size have a collective 26,454 MW under development, and just over 4,500 MW of that capacity is owned by U.S. companies,” notes S&P Global.

FAN features exposure to stocks from 10 countries, seven of which are European economies. Spain and Denmark combine for almost 27% of the fund’s weight. The U.S., 12.56% of FAN’s geographic exposure, is planning to bolster its wind footprint.

“In February, the U.S. Interior Department will hold the largest lease sale for offshore wind energy yet in the nation, covering nearly half a million acres off the coasts of New York and New Jersey. The sales could allow for an additional 7 GW of offshore wind power,” adds S&P Global.