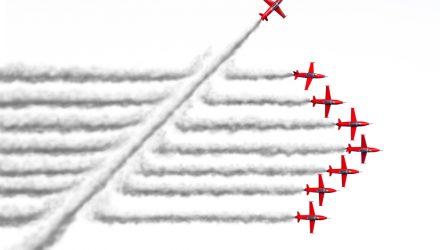 Disruptors invent the future. For example, Amazon created an online marketplace. Netflix pioneered video streaming. And Apple is the main reason 85% of Americans have a smartphone. Disruptors figure out how to accomplish things that have never been done before. This often leads to big stock market profits. But it can also lead to irrational excitement. And irrational excitement can lead to dangerous situations in the stock market.

You see, investors are emotional creatures. They naturally get excited about big new breakthroughs. Sometimes they get carried away with dreams of riches. Their imaginations run wild and they can bid disruptive stocks up to the moon. This makes disruptor stocks prone to hype and wild exaggeration.

Consider Webvan. In the mid-‘90s, startup online grocer Webvan promised to drop your groceries on your front porch within 30 minutes of ordering. Investors drooled over the idea it would claim a big share of America’s colossal $1.5-trillion grocery market. Overeager buyers caused Webvan’s stock price to leap 65% on the day of its IPO%. But it turned out to be a complete disaster. Grocer margins are already razor thin. Add in delivery costs—trucks, drivers, fuel—and Webvan lost money on every transaction. Webvan shut its doors for good in 2001 and donated all its remaining food to a food bank. And shareholders lost all their money.

As disruption investors, we must always remember timing is key for making money from disruptive megatrends. Groceries are ripe for disruption today. But back in the early ‘90s, it was simply too early. Many companies were still a good 10–15 years away from figuring out how to profitably do business on the internet.

As a rule of thumb, when you see folks getting overly excited about a company or trend, be skeptical. And be patient. There’s a good chance it will crash and you’ll get the chance to buy for pennies after the overeager masses get burned.

The famous astronomer Carl Sagan said, “It was easy to predict mass car ownership but hard to predict Walmart.” What Sagan meant was it was obvious in the ‘30s and ‘40s that cars were the future. You could see all the signs. The technology was constantly improving. Cars were getting safer and safer. The cost to buy one was plunging. And so it wasn’t all that hard to foresee that car ownership would eventually explode, as it did in the 1950s.

But it was much harder to predict the domino effects of mass car ownership. One of which was the incredible success of Walmart (WMT). You see, before every family owned a car, grocery stores usually occupied the center of town. They had to be located where people could access them easily. Mass car ownership changed all that. Walmart’s strategy was to open “big box” stores on the outskirts of towns where land and rent were cheaper.

A more recent example is how the rollout of 4G around 2011 help boost Netflix from a struggling business into a world-beater. As you likely know, Netflix began as an online DVD rental service. It mailed movies to customers in little paper sleeves. The problem? Postage costs were crippling. By 2010, Netflix’s shipping fees hit an absurd $600 million.

Because it was coughing up huge sums of money to the US Postal Service, Netflix was losing money on every movie it rented out. Netflix had toyed with the idea of offering movies online. But in the mid-2000s, internet speeds were too slow. 4G changed the game for good. For the first time ever, Netflix could reliably deliver content to customers over the internet anywhere through cell coverage.

From 1998–2010, Netflix added 20 million subscribers. That’s not bad. But it’s nothing compared to the 120 million it would add over the next eight years. And more important, its stock leapt 2,800% in the years after it launched its online streaming service.

It would be nice to invest like your father or grandfather did. You buy stock in a well-run, financially stable busines, hold it for 30 years and reinvest the dividends every quarter, and watch your money compound. For most of the 1900s, investors built lasting wealth this way.

I call this bygone time the “Golden Watch” era. Back then, many folks worked at the same company their whole lives. If you worked hard and showed loyalty, you could reasonably expect good pay, a pension, and a gold watch when you retired.

Like it or not, the world doesn’t work this way anymore. Things are changing too fast both in the business world and the stock market. Since 2000, half of all Fortune 500 companies have either gone bankrupt, been acquired, or ceased to exist. And over the past six decades, the average lifespan of an S&P 500 company has plunged from 58 years to 18 years. Even some of America’s most rock-solid, longest-lasting companies are struggling to stay afloat today.

Take Phillip Morris. The 172-year-old tobacco giant is now being disrupted by e-cigarette startups like Juul. Its stock has fallen 30% since 2017. At the same time, disruptive innovations are reaching “critical mass” at a faster rate than ever.

For example, it took the landline phone roughly 40 years to hit 40% penetration in America. TV hit the same milestone in 25 years. PCs took around 15 years to reach a similar proportion. The internet did it in under seven years. And smartphones less than four years!