You are at:Home»Nasdaq Investment Intelligence Channel»Tesla Earnings Put QCLN in the Spotlight 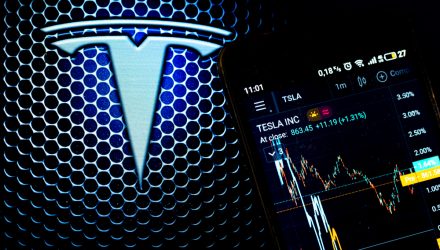 “Operating margins hit 11.0%, up from 5.7% last quarter and 5.4% a year ago,” according to Hargreaves Lansdown. “That’s despite a $176m share-based payment to Elon Musk, lower regulatory credit revenues, and a bitcoin related impairment of $23m. As a result of the improved operating profit, earnings per share rose to $1.02, well ahead of analyst expectations.”

QCLN, which follows the NASDAQ® Clean Edge® Green Energy Index, has an 8.11% weight to Tesla as of July 26.

While Tesla shares are sluggish to this point in 2021, the company’s second-quarter results show resilience against the backdrop of global chip shortages and increasing competition from lower-cost Chinese rivals. Bolstering the QCLN thesis are the facts that Tesla could impressively boost production and margins in the June quarter.

“Part of that is down to Tesla achieving the scale that’s key to competing in the automotive market. Because factories are essentially giant fixed costs, pumping more cars through the same footprint boost revenues without boosting costs by the same degree,” said Hargreaves Lansdown analyst Nicholas Hyett in a note. “What makes these numbers all the more impressive is that, despite the record $1.5bn in capital expenditure, the scale has been achieved while keeping cash flows positive. Even if you take off the controversial regulatory credit sales, the group remains in the black.”

Musk’s company said it’s delaying its highly anticipated Cybertruck until 2022, but the potential benefit in that scenario is that could lead to increased deliveries for some Tesla car models in Europe. Hyett doesn’t see the Cybertruck delay as punitive to the long-term Tesla thesis.

“As a result, the group’s on course to deliver its first European Model Ys this year, despite problems in the semiconductor supply chain being felt across the industry. The Semi truck program has been sacrificed to make that happen, pushed back to 2022, but Tesla investors should be used to product delays by now – they’re something of a hallmark of the electric car giant,” said the analyst.