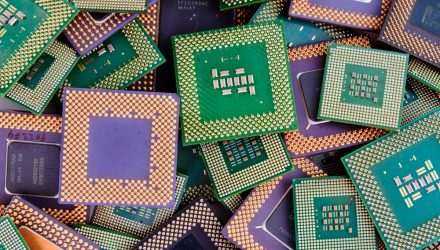 Some Bargains Available in This Chip ETF

Significant retrenchment among semiconductor equities this year has at least one silver lining: Valuations in what was previously a richly valued group are now more attractive.

Semiconductor ETFs are typically focused funds, and SOXQ reflects as much as its roster is comprised of 30 stocks. For value seekers, the advantage of SOXQ’s concentrated portfolio is that a significant portion of the fund’s weight is now considered attractively valued, if not undervalued, by some analysts. In fact, some analysts are saying there’s a rarely seen buying opportunity afoot with some chip stocks.

“Those declines, however, have created the best buying opportunity in roughly a decade for some of the industry’s biggest names,” wrote Morningstar analysts Lauren Solberg and Jokir Hossain. “Shares in Taiwan Semiconductor (TSM) and Nvidia (NVDA)—whose products power much of the technology in the modern world—are changing hands at their lowest price/fair value estimate in nine years, according to Morningstar’s equity analysts.”

Nvidia is SOXQ’s fifth-largest holding at a weight of 6.87% while chip foundry giant Taiwan Semiconductor accounts for almost 4% of the ETF’s roster, according to issuer data. Beyond that duo, there are other chip deals to be had.

“Of the 23 companies under analyst coverage in the Morningstar Global Semiconductors Index, three are currently trading at 5-star discount prices. At the beginning of the year, there wasn’t a single company from the index in that category. On top of that, an additional 13 companies under coverage are undervalued but at less-cheap, 4-star prices. None of the companies in the semiconductor index are trading at levels that Morningstar analysts consider overvalued,” added the Morningstar analysts.

The research firm added that Dow component Intel (NASDAQ:INTC) is also undervalued today. That stock is SOXQ’s second-largest component at a weight of 8.14%.

Other SOXQ components that qualify as undervalued according to Morningstar’s analysis include Microchip Technology (NASDAQ:MCHP) and Monolithic Power Systems (NASDAQ:MPWR). Those stocks combine for over 6% of the SOXQ portfolio.

“Another measure of valuations—price/earnings ratios—are also lower than usual for most semiconductor companies,” concluded Morningstar.