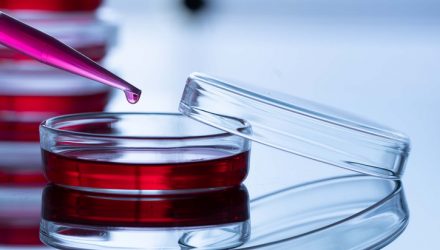 Pfizer is paying a 33% premium for the maker of Nurtec ODT, a well-known migraine headache treatment. The deal is one of 2022’s first credible signs that blue chip pharmaceutical companies still want to go shopping in the biotech space.

Should the pace of mergers and acquisitions activity increase, the Invesco Nasdaq Biotechnology ETF (IBBQ) is among the exchange traded funds that stand to benefit. IBBQ tracks the Nasdaq Biotech Index, which is one of the deepest biotech benchmarks. IBBQ holds 370 stocks, plenty of which reside in mid- or small-cap territory, and plenty of those names could be takeover targets for cash-rich pharma companies.

Jefferies analyst Michael Yee “calculates that the combined market capitalization of all the biotech stocks valued at under $5 billion is around $350 billion. The cash balance of the top 20 biopharma companies combined, meanwhile, is over $300 billion,” reports Josh Nathan-Kazis for Barron’s.

Historically, biotech bear markets aren’t conducive to a brisk pace of takeover activity. Usually, buyers wait until signs emerge that the broader market is firming, but things could be different this time. A couple of reasons underscore that point.

First, biotech stocks, including mid- and small-cap fare, are being drubbed, and their share prices are low. Second, suitors such as Pfizer are flush with cash and facing pipeline and patent cliffs, indicating they could be compelled to go hunting for inexpensive deals.

“We have reached a point where Big Pharma has so much cash they could basically buy the whole smid-cap universe,” Yee wrote. “We note M&A is tough when markets are falling fast …but eventually a few deals could catalyze things back up.”

Arguably, the primary near-term stumbling block to more biotech mergers and acquisitions activity is that rapidly declining share prices on potential targets make it difficult for would-be buyers to properly value takeover candidates. However, that scenario could be allayed if some firmness emerges in equity prices, indicating that credible floors have been put under biotech stocks.

“What’s more, Yee wrote, it would show that the pharma buyers don’t think that the price will be falling any farther. Taken together, that sense of stabilization could give investors the reassurance they need to come back into biotech, and keep buying,” concludes Barron’s.