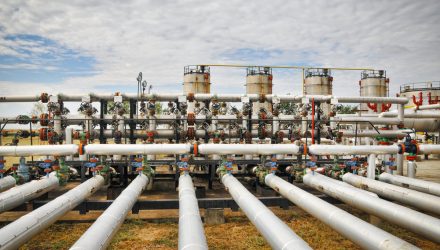 For years, natural gas was a commodities laggard, owing to abundant domestic supply. That has weighed on related equity-based exchange traded funds.

This year, however, the First Trust Natural Gas ETF (NYSEArca: FCG) is up 56%, and for as stellar as that run is, the fund’s upside may not be over because natural gas prices are rocketing higher. FCG, which tracks the ISE-Revere Natural Gas Index, holds 38 stocks, many of which are correlated to oil and natural gas prices.

That’s a positive trait because demand for the fuel is increasing while supply is declining. Many domestic shale producers, including some FCG components, cut or suspended drilling activity last year due to the coronavirus pandemic and while they’d like to take advantage of rebounding prices, it takes time to restart production.

“Natural gas, used to generate electricity and heat homes, was abundant and cheap during much of the last decade amid a boom in supply from the U.S. to Australia. That came crashing to a halt this year as demand drastically outpaced new supply. European gas rates reached a record this week, while deliveries of the liquefied fuel to Asia are near an all-time high for this time of year,” reports Bloomberg.

FCG Could Be Fabulous

Investors have likely heard plenty about the efforts of electric utilities all over the world to reduce coal consumption and embrace renewable sources, such as wind and solar.

However, that’s a long-ranging effort and it’s often more efficient to move from coal to natural gas before moving onto renewables. Plus, natural gas burns cleaner than coal. Those are positives for FCG member firms.

“With few other options, the world is expected to depend more on cleaner-burning gas as a replacement to coal to help achieve near-term green goals. But as producers curb investments into new supply amid calls from climate-conscious investors and governments, it is becoming apparent that expensive energy is here to stay,” according to Bloomberg.

Still, higher natural gas prices are a good news/bad news scenario. Obviously, higher prices for this commodity are a plus for FCG investors, but those higher prices also mean costs for other goods and services will increase and companies will pass the costs onto consumers. In essence, inflation.

“For consumers, it will bring higher monthly energy and gas utility bills. It will cost more to power a washing machine, take a hot shower and cook dinner,” adds Bloomberg.

In other words, FCG is an inflation-fighting tool with significantly more upside potential than many of the other assets investors use to deal with rising prices.