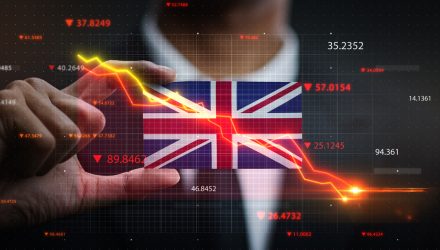 The MSCI United Kingdom Index is up more than 14% year-to-date, but for some reason, exchange traded funds such as the First Trust United Kingdom AlphaDEX Fund (NASDAQ: FKU) aren’t getting much attention.

Investors may want to reconsider the surprisingly anonymous status of British equities this year, and should they opt to do that, they may want to embrace FKU because the First Trust exchange traded fund is higher by 20.35%.

There are some compelling reasons to consider FKU, which tracks the NASDAQ AlphaDEX United Kingdom Index, over the near-term. Those include low valuations and chatter that mergers and acquisitions activity could heat up in the U.K. into year-end.

“Investors are tracking a number of undervalued U.K. companies, including household names in gambling, energy, and fashion, as some of the world’s lowest equity valuations raise the prospect of a new round of takeover deals in the final months of 2021,” reports Bloomberg.

While British stocks are almost universally viewed as value plays, FKU’s methodology ensures investors don’t have to choose between value and growth.

The NASDAQ AlphaDEX United Kingdom Index’s selection criteria features growth factors “including 3-, 6- and 12- month price appreciation, sales to price and one-year sales growth, and separately on value factors including book value to price, cash flow to price, and return on assets,” according to First Trust.

FKU’s value lean is relevant to investors because analysts see that as one of the catalysts driving what’s already been a brisk pace of consolidation in the U.K. this year.

“The reason for the interest is clear. The valuation gap between the U.K. and other major markets has increased, as shown by the Ebitda multiple of the MSCI U.K. Index, a metric commonly used to value M&A targets. The U.K. stock market is now trading at a 50% discount relative to the U.S. compared with about 11% five years ago,” according to Bloomberg.

Among the sectors in the U.K. that could be hotbeds of more mergers and activity are consumer discretionary and industrials, which combine for almost 28% of FKU’s roster. In fact, the consumer cyclical sector is among the cheapest groups in the U.K.

FKU, which turns 10 years old next February, is home to 75 stocks, none of which command weights of more than 2.58%, confirming that single stock risk is benign in the fund.