You are at:Home»Nasdaq Investment Intelligence Channel»Cybercrime Has Widespread Implications, CIBR Has the Investment Goods 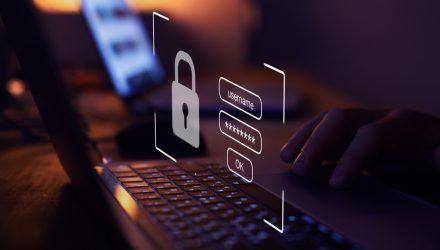 Cybercrime Has Widespread Implications, CIBR Has the Investment Goods

Amid a recent spate of cyberattacks on the federal government and companies, it’s not surprising that many investors think that those are the primary end markets when it comes to cybersecurity spending and the need for protection.

That suits exchange traded funds such as the First Trust Nasdaq Cybersecurity ETF (CIBR) just fine. However, with October being Cybersecurity Awareness Month, it’s worth remembering that anyone — company, government, or private citizen — can be the victim of cyber theft.

Obviously, First Trust has skin in the game with CIBR, but the issuer highlights some alarming cybersecurity data points that underscore the long-term relevance of CIBR.

“Data from the Identity Theft Resource Center indicates there were 1,291 publicly reported data breaches in the U.S. through the first nine months of 2021,” according to the issuer, citing 24/7 Wall Street. “That already tops the 1,108 breaches for full-year 2020. Cyberattacks have been the primary cause of the compromised data, including 244 ransomware attacks. For comparative purposes, there were 241 ransomware attacks reported for the two-year period ended 2020.”

The Identity Theft Resource Center (ITRC) has its own treasure trove of data indicating that cybersecurity is an important consideration for individuals as well as companies and governments. ITRC, which works with victims of identity theft, points out that the government isn’t allocating resources to assist victims of cybercrime.

“The US Department of Justice has not funded any program aimed at helping identity crime victims in eight of the last 10 budget cycles, including 2019, 2020, and to-date in 2021. That’s despite a nearly 250 percent increase in identity fraud reported to the FTC – from 400,000 in 2016 to more than 1.3 million last year – and a 2x increase in the number of identity crimes reported to the FBI over the same time period,” says ITRC CEO Eva Velasquez.

There are potential implications for CIBR in those data points because as more consumers become familiar with the need for cybersecurity, the fact that the government isn’t supporting identity theft victims, and the fact that recovering from that crime is a lengthy process, they may be compelled to become proactive and spend on cybersecurity protection for their personal devices. That could boost sales for some CIBR member firms.

ITRC findings indicate that victims of cybercrime hail from a variety of demographics and nearly 30% have been victimized more than once. Those data points could be signs that some CIBR holdings with consumer-facing product offerings could benefit over the long haul.