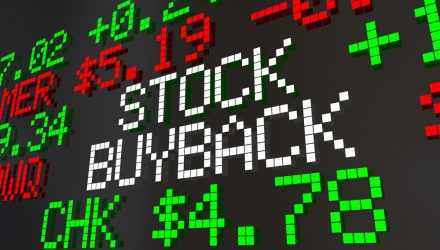 For all the talk about S&P 500 dividends growing anew and at an impressive rate – and that chatter is warranted – investors shouldn’t overlook the rebound in share repurchase programs.

Just look at the Invesco BuyBack Achievers ETF (NASDAQ: PKW). That exchange traded fund is higher by nearly 23% year-to-date, well ahead of the 17.67% returned by the S&P 500 as of July 23. The $1.18 billion PKW, which turns 15 years old in December, follows the NASDAQ US BuyBack Achievers Index.

Not all companies engaging in share repurchase programs qualify for entry into PKW’s benchmark. That index requires that member firms reduce shares outstanding counts by at least 5% over the trailing 12 months. That mandate could prove all the more potent at a time of increasing buyback announcements.

“Buyback announcements this year have already hit $431 billion, exceeding 2020’s $307 billion total, according to J.P. Morgan data. That number should continue to grow, and it could top the previous record of $1 trillion on a rolling 12-month basis at some point in the future, according to J.P. Morgan strategist Dubravko Lakos-Bujas,” reports Ben Levisohn for Barron’s.

Shareholder rewards, whether it’s buybacks or dividends, are signs of quality companies. To that end, PKW, though sector agnostic, has ample quality positioning with a combined 38% weight to technology and healthcare stocks.

Throw in the 27% the fund devotes to financial services names, and PKW isn’t just a play on soaring buybacks. It’s a credible avenue for tapping into sectors driving the latest wave of dividend growth.

“All told, S&P 500 corporations could buy back $875 billion of their stock over the next year, while paying out another $575 billion in dividends, providing investors with an expected shareholder yield of 3.9%,” according to Barron’s.

Another benefit of PKW is that its style and size agnostic. While many investors associated buybacks with large-cap companies, PKW doesn’t limit its roster to that universe. In fact, mid- and small-cap stocks combine for over 62% of the fund’s weight.

Additionally, the concept of buying back shares isn’t confined to a particular style – growth or value. However, PKW currently features a value lean as about 47% of its 108 holdings across all three market cap spectrums are classified as value names. That compares with approximately 13% with the growth designation.