You are at:Home»Nasdaq Investment Intelligence Channel»Bet on Biotech Small Caps to Bounce Back 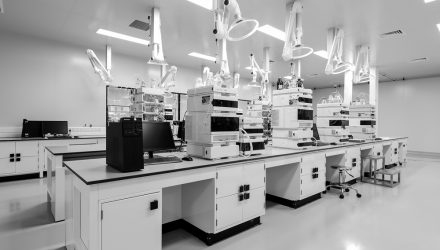 Bet on Biotech Small Caps to Bounce Back

Large cap biotechnology have strengthened in recent months, but smaller counterparts are still waiting on their 2021 moment. When that happens, the Defiance Nasdaq Junior Biotechnology ETF (IBBJ) could be the ETF to watch.

“Small-cap biotech companies have the potential advantage of a Food & Drug Administration (FDA) more receptive to cutting-edge and rare diseases therapies,” according to Defiance ETFs. “They are also strengthened by increased patient lobbying and greater willingness by insurers to pay for treatments.”

That’s a potential point in IBBJ’s favor because many large cap biotech exchange traded funds are dominated by companies that have already experienced significant market capitalization growth. As Defiance points out, the total value of the global pharmaceutical market was $390 billion in 2001, but it soared to $1.25 trillion at the end of 2019.

In other words, it’s good to get involved early with the right biotechnology companies, but stock-picking to that effect in this industry is difficult. IBBJ eases the burden.

“Owing to the fact that many small biotechnology companies aren’t profitable, earnings reports don’t mean much in this space,” according to Nasdaq. “The primary catalysts for upside in these stocks, including IBBJ components, are the aforementioned of trial and FDA news and mergers and acquisitions activity.”

IBBJ offers investors another potentially significant benefit: considerable leverage to industry consolidation. Said another way, by capping components at market caps of $5 billion, IBBJ could be fertile territory for large cap biotechnology and pharmaceuticals companies looking to make deals. In fact, IBBJ’s much of IBBJ’s roster could be attractive to other healthcare sector suitors.

“More than 90% of life sciences M&A is for deals of less than $500 million, and they usually consist of pharmaceutical companies making acquisitions of pre-commercial middle market companies,” writes Adam Lohr of RSM US LLP.

Mid- and small-cap biotechnology names are often the centers of takeover of rumors, but deal-making has been slow this year. However, that could change before the end of 2021.

“In April, Moody’s Investors Service said Amgen, Bristol Meyers Squibb, Johnson & Johnson, and Merck are among the large-cap healthcare companies with the resources, need and perhaps desire to go shopping and their respective hunts could potentially lead them to at least evaluating IBBJ holdings,” adds Nasdaq.