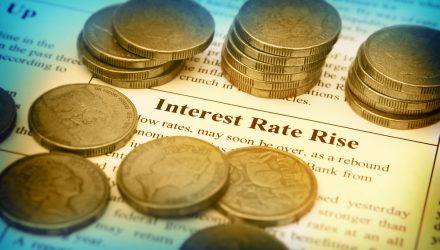 The U.S. capital markets are poised for the first rate hike since 2018. For investors seeking to hedge against rate hikes, there’s a plethora of options, but they don’t have to take on multiple positions.

Many consumers are certainly feeling the pangs of inflation, which the Federal Reserve must temper with rate hikes. Whether it’s pain at the pump or seeing mortgage rates rise, inflation can certainly rack the brain of average consumers in addition to their bank accounts.

“This is something really hard for the typical consumer to understand, seeing these fast price raises that are so unfamiliar to large parts of our population who haven’t seen inflation rates like this before,” said Tara Sinclair, a senior fellow at the Indeed Hiring Lab. “And then trying to figure out the Fed’s complicated role in all of this is very confusing.”

The best way to think of rate hikes is how brakes work on a vehicle. When the economy picks up too much speed, the Fed has to pump the brakes via rate hikes.

A One-Stop-Shop to Take On Rising Rates

Investors saw firsthand how volatile the markets can be when inflation fears take hold of the major indexes. One exchange traded fund (ETF) places its focus on beating indexes when the threat of rising rates is on the horizon.

The ProShares Equities for Rising Rates ETF (EQRR) seeks investment results that track the performance of the Nasdaq U.S. Large Cap Equities for Rising Rates Index. The goal of the fund is to provide relative outperformance, as compared to traditional U.S. large-cap indexes, such as the S&P 500, during periods of rising U.S. Treasury interest rates.

The fund targets sectors that exhibit the most correlation to the yields from the benchmark 10-year Treasury note. Furthermore, within those sectors, it focuses on holdings that perform best when rates rise.

For example, financials can perform well when rates rise by earning more revenue on lending products. That said, as of March 15, EQRR allocates 30% of its assets towards financials.