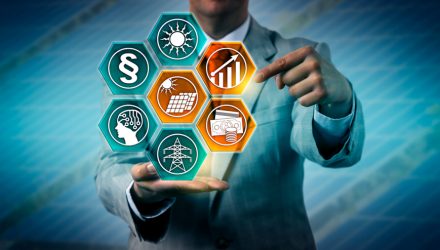 Utilities Sector Anything But Boring This Year

The normally sleepy utilities sector has been anything but boring this year. In fact, it’s one of the best-performing groups in the S&P 500. And that’s saying something because utilities stocks are usually vulnerable to rising interest rates.

Yet, plenty of utilities exchange traded funds are delivering for investors as rates rise and the broader market struggles. For example, the Invesco DWA Utilities Momentum Portfolio (NASDAQ: PUI) is up more than 5% year-to-date while the S&P 500 is lower by nearly 8%.

“Right now, however, higher yields are a result of the Fed trying to slow economic growth, and that’s scaring investors into utilities. Such a slowdown would dent profit gains in cyclical sectors. But utilities’ earnings growth should be stable, as they can keep raising prices for residential and commercial customers, which is precisely why strategists at Morgan Stanley recently upgraded the sector,” reports Jacob Sonenshine for Barron’s.

A favorable environment for utilities is particularly relevant in the case of PUI because of the Invesco ETF, due to its roots in momentum and relative strength. Speaking of momentum and strength, the utilities sector may have those attributes on the earnings front.

“Analysts expect utilities’ 2023 earnings per share to rise almost as fast as the S&P 500’s 10% rate, which could decline should the economy falter. Utilities’ steady growth—higher than the low single digits in percentage terms in the past few years—is aided by demand for renewable energy,” according to Barron’s.

Several of PUI’s 40 holdings have exposure to renewable energy and that includes the potential for the pipeline operators in the fund to leverage their assets to transport clean energy in the future. That indicates PUI has more of a growth profile than investors may initially surmise. On that note, over three-quarters of the fund’s holdings are mid- and small-cap equities. Good news: More utilities may be compelled to join the renewable transition over time.

“State regulators only allow utilities to realize a set return on their assets—roughly 10%. When they invest in renewable projects, they boost their total assets. As their assets increase, their earnings grow almost as fast,” adds Barron’s. Its 30-day SEC yield is 1.52%.