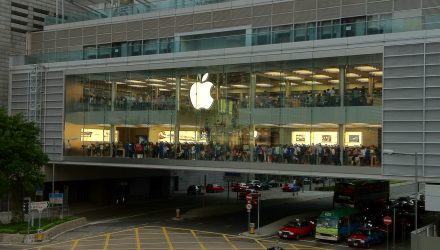 The Nasdaq Composite opened higher in Wednesday’s trading session, boosted by Apple’s earnings announcement on Tuesday as the tech giant announced revenue generation of $53.3 billion and an EPS of $2.34–both results beating analyst estimates of $52.3 billion and $2.18 per share.

The markets got an extra boost from strong employment data from ADP and Moody’s Analytics–both reported that private payrolls in the U.S. grew by 219,000 in July, which bests the 185,000 gain forecasted by Reuters. The job gains in July were the best since February, which is a positive precursor to the forthcoming report from ADP and Moody’s that will highlight the U.S. government’s monthly nonfarm payrolls report–scheduled for release on Friday at 8:30 a.m. ET.

“The ADP survey has never been a great guide to the actual payrolls figures, but there is plenty of other evidence suggesting that jobs growth has remained strong,” said Andrew Hunter, U.S. economist at Capital Economics. “Most employment surveys are at a high level, while initial jobless claims recently touched their lowest level in almost 50 years. With activity booming on the back of the fiscal stimulus, the continued strength of the labor market will keep the pressure on the Fed to continue raising interest rates.”