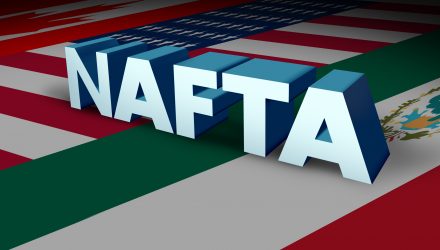 NAFTA Talks Still an Issue for the Mexico ETF

The iShares MSCI Mexico Capped ETF (NYSEArca: EWW), the largest ETF dedicated to Mexican equities, is lower by about 4.6% over the past month and negotiations surrounding the North American Free Trade Agreement (NAFTA) are seen as weighing on Mexican stocks.

“The U.S. is frustrated with what it perceives to be the reluctance of Canada and Mexico to present counter-proposals to U.S. positions on key issues such as regional content requirements and dispute settlement, said a person close to the negotiations,” reports Bloomberg. “American officials are especially discouraged by Canada for publicly stating that the U.S. proposals are unacceptable, without presenting alternatives at the negotiating table, said the person, who spoke on condition of anonymity.”