You are at:Home»Equity ETFs»NAFTA Risk is a Problem For The Mexico ETF 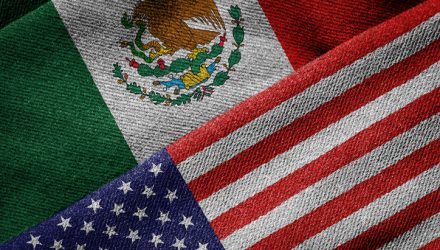 NAFTA Risk is a Problem For The Mexico ETF

The iShares MSCI Mexico Capped ETF (NYSEArca: EWW), the largest ETF dedicated to Mexican equities, is slumping. Down about 8% over the past month, the ETF is now up 14% this year, meaning its year-to-date gain has been cut in half in just seven weeks.

Negotiations surrounding the North American Free Trade Agreement (NAFTA) are plaguing Mexican stocks and EWW. EWW tries to reflect the performance of the MSCI Mexico IMI 25/50 Index, which does not hedge its currency risks.

“The ongoing North American Free Trade Agreement (NAFTA) renegotiations are not likely to lead to a full abrogation of the treaty, and the final deal should not have a significant impact on Mexico’s trade access to the U.S.,” says Fitch Ratings. “However, the recent extension of the negotiation timeline and comments from each government following the conclusion of the fourth round of talks have highlighted growing uncertainty and risks to the treaty.”