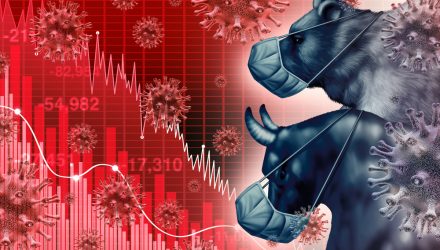 A $10 Trillion Response to the Global Pandemic

Last week I was introduced to a board game called Pandemic. In the game, players are up against the clock to find the cure to viral outbreaks and contain them before they spread across the entire globe.

What makes Pandemic especially unique is that, unlike most games, it’s cooperative. Players are not opponents, as they are in, say, Monopoly. Instead, they must work as a team to eliminate the viral threat, or die trying.

The real-life situation involving COVID-19 is very much the same. Preventing the spread of this disease will require the vigilance and cooperation of everyone on the planet in some capacity or another. While we await effective treatments and a vaccine to be developed, the most impactful thing people can do is keep their distance from others and, of course, wash their hands. To that end, California, New York, Illinois and other states have imposed stay-at-home orders, joining a growing number of countries around the world, some of which are fining people and companies that choose not to comply. People entering Australia from abroad right now face up to $11,000 in fines and six months in jail for ignoring a 14-day self-isolation quarantine.

These extreme measures appear to be having great success, particularly in Asian countries. Whereas the number of cases continues to rise in Italy, Spain, Iran and elsewhere, the number has begun to stabilize, if not plateau, in Asian countries. China, in fact, reported a drop in new cases on Monday, reversing four straight days of increases.

Synchrony among central banks and finance ministers will be key in softening the virus’s economic and financial blow, which by some projections could be unprecedented. Goldman Sachs estimates that the U.S. economy could contract as much as 24 percent—roughly one-fourth—in the second quarter alone.

Such a drop, according to Goldman analysts, “would be nearly two-and-a-half times the size of the largest quarterly decline in the history of the modern GDP statistics.”

Get Ready for Synchronized Monetary and Fiscal Stimulus

As a result, we’re seeing rates being cut to near-zero—at least 38 central banks lowered rates last week alone—while fresh rounds of quantitative easing (QE) are quickly being rolled out. Unheard-of amounts of money are being printed to add liquidity, with more on the way.

On the fiscal side of things, President Donald Trump announced on Friday that the government will be waiving all interest payments on student loans and pushing back the income tax deadline to July 15. This is on top of a mammoth $1 trillion stimulus package, which is currently being debated in the Senate after failing to be passed Sunday night on opposition from Democrats..

In a webcast conducted last week by Jeffrey Gundlach, the DoubleLine Capital founder said that he predicts the U.S. deficit will grow from $1 trillion today to $3 trillion on stimulus spending, and that within the next two to three years, total national debt will top a head-spinning $30 trillion.

All of this is to say that combating COVID-19 is not going to come cheap. My guess is that once the dust settles, this global health scare may well have cost us upwards of $10 trillion, potentially making it one of the most expensive crises in human history.

That’s why I believe adding to your gold position is so crucial right now. The yellow metal is trading close to $1,530 an ounce, which is still a discount from its 52-week high as investors have liquidated their holdings to cover margin calls and pay upcoming income taxes. The U.S. dollar soared as a result, with the Bloomberg Dollar Spot Index hitting an all-time high last Thursday before pulling back after California Governor Gavin Newsom issued the statewide stay-at-home order.

With the dollar this strong, it’s been an exceptional time to accumulate gold. Real rates are negative in the U.S., which is positive for the yellow metal, so when the dollar pulls back, I expect gold to take off. Unlike the greenback, the metal has been trending up and to the right since the gold bull market started nearly five years ago.

Eventually, though, I see gold hitting new all-time highs—possibly surpassing $10,000—on the ballooning monetary base and public debt, not to mention the unmatched fear that’s gripping Wall Street.

Last week the CBOE Volatility Index (VIX), known as the “fear gauge,” hit its highest-ever recorded level. The VIX closed at 82.69 on Monday, beating the previous high set in November 2008. Not only was Monday’s close a new record, but it was also the biggest one-day spike in VIX history, jumping almost 25 points in a single session.

As further evidence of the deteriorating market sentiment, our proprietary U.S. Global Sentiment Indicator fell to an all-time low last Wednesday. The indicator—which tracks 126 commodities, indices, sectors, currencies and international markets to help monitor volatility and cash flow levels—plunged below 20, indicating that the market is extremely oversold, even more so than it was during the financial crisis.

With gold doing well and poised to go higher, I anticipate that gold mining stocks will report strong earnings and cash flow for the first quarter.

The Coronavirus Is the Biggest Threat to Globalization

A final word on the virus. An interesting op-ed appeared in the Wall Street Journal last week, titled “Coronavirus Vindicates Capitalism,” and in it, the columnist, Kimberley Strassel, argues that the reason the U.S. is faring so much better than other countries in the fight against COVID-19 comes down to the strength of our commitment to capitalism.

“To the extent America is weathering this moment,” Strassel writes, “it is in enormous part thanks to the strength, ingenuity and flexibility of our thriving, competitive capitalist players,” including drugmakers.

I couldn’t agree more. Even as Joe Biden said during his debate with Bernie Sanders, Italy’s single-payer health care system has not appeared to have benefited the Italian people.

Similarly, I think the coronavirus has exposed America’s vulnerabilities related to its supply chain. Over the past few decades, globalization has been great at keeping prices low for consumers and saving manufacturers money, but we’re finding out the hard way that it can also result in shortages in essential drugs and medical supplies and equipment, including testing kits. Germany, for instance, has restricted the export of face masks. It’s being reported that China is hinting at withholding life-saving drugs.

Where this is all leading, I believe, is an even stronger resurgence in economic nationalism. Because of the impact the coronavirus has had on supply chains, we may start to see drugmaking and health care manufacturing return to the U.S. Distilleries across the country are shifting production from liquor to hand sanitizer to meet surging demand. And today, Everlywell, an Austin-based medical diagnostics company, became the first in the U.S. to offer a home test kit.

Both Everlywell and U.S. distilleries deomonstrate the sort of ingenuity, flexibility and competitiveness Kimberley Strassel was referring to in her op-ed. As long as the U.S. remains a free and capitalistic society, challenges such as COVID-19 won’t stand a chance.

If you missed my reflection last week on the bear market, you can read it now by clicking here!

All opinions expressed and data provided are subject to change without notice. Some of these opinions may not be appropriate to every investor.Some links above may be directed to third-party websites. U.S. Global Investors does not endorse all information supplied by these websites and is not responsible for their content.

The S&P 500 Stock Index is a widely recognized capitalization-weighted index of 500 common stock prices in U.S. companies. The Bloomberg Dollar Spot Index (BBDXY) tracks the performance of a basket of 10 leading global currencies versus the U.S. Dollar. Each currency in the basket and their weight is determined annually based on their share of international trade and FX liquidity. Created by the Chicago Board Options Exchange (CBOE), the Volatility Index, or VIX, is a real-time market index that represents the market’s expectation of 30-day forward-looking volatility. Derived from the price inputs of the S&P 500 index options, it provides a measure of market risk and investors’ sentiments.