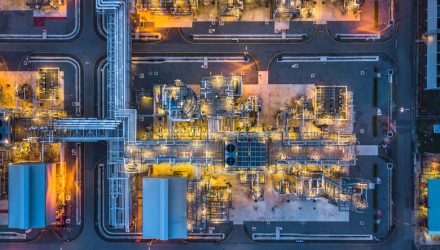 One of the big news items out Wednesday was another yield curve inversion. The yield curve inverts when yields on 10-year Treasuries fall below those on two-year notes and the scenario has historically proven to be a reliable recession indicator.

There are some sectors that prove sturdy after the yield curve inverts and perhaps unsurprisingly, those are defensive groups, such as consumer staples and utilities.

The utilities sector is one of this year’s best-performing groups, underscoring the notion that many investors will embrace utilities stocks and exchange traded funds during favorable interest rate environments. The Federal Reserve recently obliged by lowering interest and another rate cut is possible before the end of this year. The Utilities Select Sector SPDR (NYSEArca: XLU), the largest utilities sector exchange traded fund has been an impressive performer.

“This type of inversion has happened three times since 1980 and data showed that only two sectors yield positive returns six months after an inversion 100% of the time, and only one sector beats the broader market,” according to CNBC.

Investors who are looking for companies to invest in that carry minimal risk will often consider utility stocks. Utility companies typically comprise the most fundamental necessities, such as food, water and shelter, or are closely related to the energy required to refrigerate food, heat up water and light up a house.

“Utilities is the best performing sector after a yield curve inversion. Although the inversion is an early recession indicator, data shows that if investors turn defensive, there is still a buying opportunities for stocks,” reports CNBC.

The Consumer Staples Select SPDR (NYSEArca: XLP) is another post-inversion idea to consider.

Consumer staples are the products that people use frequently and occupy a significant chunk of the average household’s budget. The sector provides the goods that shoppers typically consume on a weekly or even daily basis, and many will continue to purchase these products even during a recession.

“Consumer staples stocks, like Procter & Gamble and Coca-Cola, are the other consistent winners in the months following an inversion, with positive returns after all three of the last inversions,” according to CNBC.