You are at:Home»Multi-Asset Channel»Tilt Into the Value Run with This FlexShares ETF 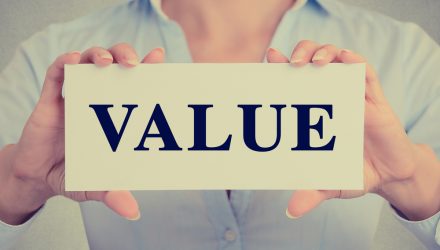 Tilt Into the Value Run with This FlexShares ETF

Value stocks are reclaiming their lost glory. That may be good news, but some market observers see sustainability in this run.

That’s to the benefit of assets like the FlexShares Morningstar U.S. Market Factor Tilt Index Fund (NYSEArca: TILT). TILT isn’t a dedicated value fund, but its exposure to stocks with that designation is enough to power the ETF to a 12% year-to-date gain.

There could be more upside to come for TILT because multiple points augur well for the still nascent value resurgence.

“In our view, this recent widening in multiples has several implications. First, diverging valuation multiples between cheap and expensive stocks are inconsistent with the concern that the value premium may have been arbitraged away as a result of it being so well known and due to substantial funds being invested in value strategies,” according to Robeco research. “Were this the case, it would be reflected in a narrowing valuation spread over time instead of the widening trend we have witnessed. Therefore, it is highly unlikely that arbitrage activity was the driver of the recent underperformance of value strategies.”

While many investors don’t want to be bogged down with complex investment terms and jargon, one concept they may want to consider is value spreads.

“Diverging valuation multiples suggest that return prospects for value are currently high,” notes Robeco. “The widening of the valuation spread in the late 1990s was followed by mean reversion in the early 2000s, which resulted in the massive outperformance of cheap stocks over their expensive counterparts.”

Adding to the case for TILT is that so-called cheap stocks are sporting favorable profitability traits, which is noteworthy because inexpensive stocks are often hindered by a lack of profits and scant earnings power.

“Admittedly, cheap stocks have been less profitable between 2017 and 2020,” adds Robeco. “However, their profitability has improved considerably in recent months. In fact, cheap stocks were actually slightly more profitable than their expensive peers at the end of March 2021. Therefore, the current valuation spread cannot be justified by differences in profitability.”