You are at:Home»Multi-Asset Channel»Tendency for Japanese Firms to Hold Cash is Good for Dividends 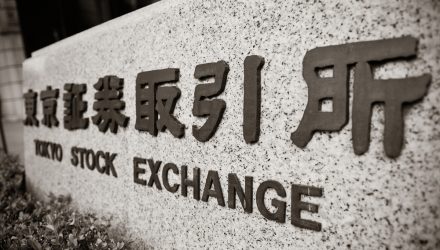 Tendency for Japanese Firms to Hold Cash is Good for Dividends

The coronavirus pandemic certainly injected a healthy dose of fear for fixed income seekers as businesses that were strapped for cash saw their ability to churn out dividends in jeopardy. That hasn’t been the case for many Japanese companies given their tendency to hold cash.

Per a Bloomberg news report, companies in Japan “have long been criticized for hoarding too much cash. Now the habit is being touted as a reason to buy Japan stocks, as the coronavirus pandemic dims the outlook for dividend returns elsewhere.”

“Japan has ‘improving dividend appeal,’ with its companies less prone to payout cuts than those in other countries given their net cash positions and improving governance, Jefferies analysts wrote in a report,” the Bloomberg article said further.

“Japan is better placed versus its peers and is unlikely to see global financial crisis-era cuts,” strategist Shrikant Kale wrote. “Amid deflationary concerns, the race to the bottom in global bond yields bodes well for dividend strategies.”

This capital inefficiency, according to the report, has been a long-standing problem in Japan. To address this problem of excess cash, which is a good problem to have depending on who you ask, Prime Minister Shinzo Abe has been pushing to improve governance practices.

“Before, Japan used to have a tendency of showing lower dividends compared to other regions,” said Yunosuke Ikeda, chief equity strategist at Nomura Securities Co. “As the government hasn’t changed its stance of pushing for better governance, it will make dividend cuts difficult, allowing them to be more ‘sticky’ than those of U.S. and European companies.”

Nonetheless, the Bloomberg article cited that dividends for Japanese companies have soared 173% in the last decade.

“Japanese companies have more leeway given how cash-rich they originally were,” Ikeda said. “Any decrease in dividends for fiscal 2020 will likely be modest. In the long run, the practice of stable dividend payouts won’t change, meaning there’s a good chance Japan firms will gradually catch up to those in Europe and the U.S.”

Investors looking for exposure to Japan can look at exchange-traded funds (ETFs) like the Xtrackers MSCI Japan Hedged Equity ETF (DBJP). DBJP seeks investment results that correspond generally to the performance, of the MSCI Japan US Dollar Hedged Index.

The fund, using a “passive” or indexing investment approach, seeks investment results that correspond generally to the performance, of the underlying index, which is designed to track the performance of the Japanese equity market while mitigating exposure to fluctuations between the value of the U.S. dollar and the Japanese yen. It will invest at least 80% of its total assets in component securities (including depositary receipts in respect of such securities) of the underlying index.