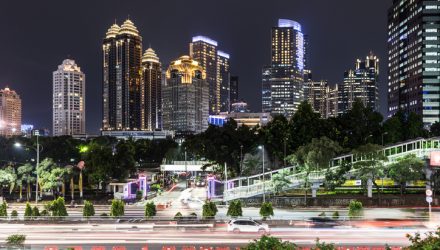 Last week, it appeared as though significant progress was being made on the trade front between the U.S. and China, but reports from state-run Chinese media outlets on Monday took a more measured assessment of the situation, prompting choppy trading on U.S equity exchanges

For investors looking to remain engaged with emerging markets equities while an official trade deal is hammered out, the FlexShares Morningstar Emerging Markets Factor Tilt Index Fund (NYSEArca: TLTE) is a credible idea to consider.

The “tilt” in TLTE is away from large-caps and towards higher allocations to mid- and small-caps than are seen in most diversified emerging markets ETFs. That strategy has proven advantageous in years in which state-controlled firms have been laggards.

“The list of worries hanging over emerging markets is about as long as it’s been at any time this year,” according to Bloomberg. “Yet it’s a measure of the current mindset that trade, rather than any or all of those idiosyncratic concerns, will be the biggest focus this week as Friday’s partial agreement between the U.S. and China provides a moment of comfort.”

Improving sentiment toward Chinese stocks is vital for TLTE’s fortunes because the world’s second-largest economy accounts for 32.14% of the fund’s weight, by far its biggest geographic exposure.

What’s Next For TLTE

TLTE takes a traditional smart beta approach with its emphasis on small-caps and value stocks, along with fundamental characteristics like return variability and yield. More than half the ETF’s holdings are considered value stocks.

“Apart from the many unresolved issues in the negotiations, China’s own economic performance will be at the forefront of investor concerns,” reports Bloomberg.

GDP growth there likely slowed to 6% in the third quarter.

Emerging markets have always given investors another look at the global growth landscape, particularly since they could be in different economic phases—for example, the U.S. could be reaching a peak while an emerging market country could be in a growth acceleration phase.

While the capital markets are communicating a risk-off sentiment with an appetite for bonds and other safe-haven assets, investors should keep an eye on emerging markets, which have been experiencing sustained growth.

For more on ETF strategies, please visit our Multi-Asset Channel.