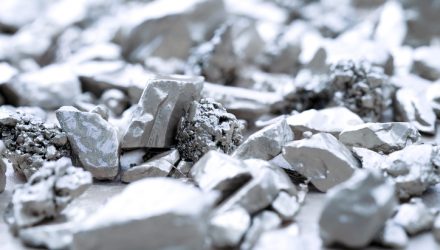 In a year in which gold notched its best annual showing since 2010 and palladium soared, platinum and the  Aberdeen Standard Platinum Shares ETF (NYSEArca: PPLT) went largely overlooked.

PPLT seeks to reflect the performance of the price of physical platinum, less the expenses of the Trust’s operations and is designed for investors who want a cost-effective and convenient way to invest in platinum with minimal credit risk.

PPLT still finished 2019 with a gain of nearly 21% and there is evidence to suggest some professional investors are betting on more upside for platinum in the new year.

“Long-only exchange-traded funds focused on the precious metal used to curb emissions from diesel cars attracted $850 million this year through Monday, the biggest annual inflow. Hedge funds and other large speculators boosted their bullish bets on platinum to the highest in more than three years,” reports Bloomberg.

“Platinum, which is also used in jewelry, has traded at a premium to gold until 2014. As prices of precious metals fell across the board, the growing popularity of gasoline-fueled vehicles as a result of the scandal pushed prices of palladium above platinum by 2017. Platinum is now starting to catch up to its peers, with prices climbing 8.6% in December,” reports Bloomberg.