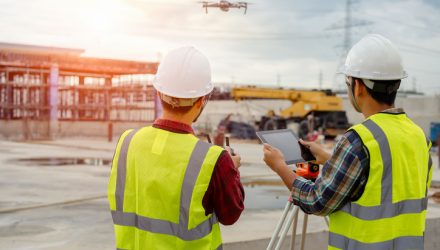 The FlexShares STOXX Global Broad Infrastructure Index Fund (NYSEArca: NFRA) is up almost 2% this month and is nearing a technical breakout. Those could be signs investors are betting the infrastructure ETF will be a winning bet with 2020 being an election year.

“Once again, Americans yearning for an upgrade to the country’s outdated infrastructure will look to the presidential election in hopes of a grand plan,” reports Fortune. “While there’s wide agreement that the country’s roads, bridges, railroads and airports and other public works are long overdue for help, there’s been scant action despite a lot of big talk. The American Society of Civil Engineers has said more than $2 trillion in additional funding is needed by 2025 alone.”

In terms of politics, this time its Democratic presidential candidate and former Vice President Joe Biden promising to spend $1.3 trillion on domestic infrastructure needs should he win the presidency. But there’s a catch when it comes to that spending.

“Ahead of the previous presidential election, then-candidate Donald Trump promised a $1 trillion infrastructure proposal. But the plan his administration released in 2018 floundered after critics said it relied too much on encouraging spending by states and localities and that much more federal money was needed,” according to Fortune.

“Citigroup analyst Andrew Kaplowitz said that in the absence of a more comprehensive federal infrastructure bill, state and local governing bodies, have started to ramp investments, often backed by measures like dedicated tax/funding sources. Such spending collectively accounts for about three-fourth of public infrastructure related spend in the U.S., he said,” reports Fortune.