You are at:Home»Multi-Asset Channel»A Notable Bank ETF With PPP Positioning 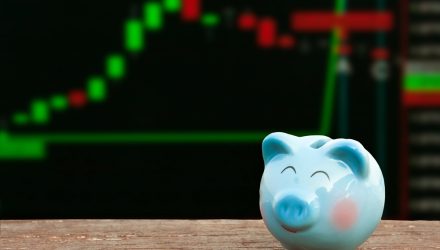 Another round of Paycheck Protection Program (PPP) funds were made available Monday and demand was so strong that various websites taking applications crashed within minutes. Surging loan growth ties to PPP is seen benefiting small banks, a trend that could provide a lift to the Invesco S&P SmallCap Financials Portfolio (NYSEArca: PSCF).

PSCF tracks the S&P SmallCap 600® Capped Financials & Real Estate Index. That index “is designed to measure the overall performance of common stocks of US financial services companies. These companies are principally engaged in the business of providing services and products, including banking, investment services, insurance, and real estate finance services,” according to Invesco.

Data confirm loan is picking up and that might explain why PSCF is higher by more than 9% over the past month.

“Excluding the 25 largest institutions by assets, commercial and industrial loans increased 6.3% during the week ended April 15, according to seasonally adjusted data in the Federal Reserve’s most recent H.8 report on commercial banks,” reports S&P Global Market Intelligence. “That represents a huge jump from growth rates of 0.6% to 0.8% in the preceding two weeks, and leapfrogs growth of 2.1% to 2.3% during two weeks in March when corporate draws against bank credit lines were particularly heavy.”

The $2 trillion CARES Act stimulus package passed by the sentence aimed at propping up the economy sapped by the coronavirus outbreak features elements that are beneficial to banks, including smaller lenders.

“Overall, C&I loans across commercial banks increased $537.91 billion, or 23%, from March 4 to April 15, with much of the growth explained by borrowing against existing lines by corporations that large banks said subsided in April,” according to S&P Global Market Intelligence. “Companies had been frightened about their ability to access cash to survive the pandemic-driven downturn, but interventions by the Federal Reserve have helped thaw debt capital markets.”

The loan growth is pivotal for PSCF at a time when low interest rates are seen punishing smaller banks.

Banks rely on interest rates for profits and naturally, the higher, the better. The problem for banks is that their profit margins could suffer if they are paying out deposit rates at a higher level than market rates. Their earnings are also damaged when the spread between short-term and long-term rates flattens.

With the Federal Reserve having pared interest rates to near zero, concerns are mounting about banks’ net interest margins and whether those depressed margins could affect shareholder rewards, including buybacks and dividends. Bankers typically make their money off the difference between long-term loans and deposits, underscoring investors’ apprehension about the industry right now.