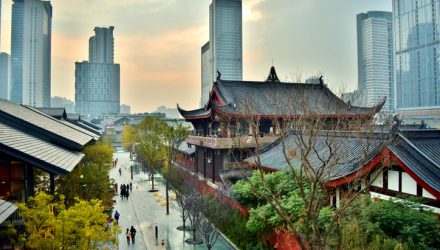 Looking To China For Much Sought After Yield

Investors looking for higher yields than what they’re finding on Treasuries and other developed market sovereign debt may want to look to China, home to an increasingly open bond market.

KCCB currently sports a 30-day SEC yield of 5.31%, which is mostly in line with what investors find on the largest domestic high-yield debt ETFs.

“The macroeconomic environment in China differs wildly from those currently seen in many developed economies. China’s GDP growth rate remains high, at 6%5 per annum,” said KraneShares in a recent note. “Investors are compensated for lending in China as opposed to in Germany and many other European markets whose negative rates mean investors must pay to lend. China might be the only major central bank pursuing an independent and conservative monetary policy.”

China’s high-yield bond market, though often overlooked by foreign investors, isn’t small. At the end of last year, more than 250 Chinese companies had issued $232 billion worth of junk bonds there.

Earlier this year, Chinese bonds made their debut on the Bloomberg Barclays Global Aggregate Index –a move that would give investors more access to China’s $13 trillion bond market. Market analysts are expecting that this inclusion would garner a capital influx of $150 billion in foreign inflows.

“We believe investors are paid a premium for investing in China’s debt markets under current macroeconomic conditions,” according to KraneShare. “This stems from the market’s underappreciation of bond accessibility for foreign investors and government efforts to stabilize credit in the economy.”

Related: When It Comes to China Exposure, Your ETF Choice Matters

At the end of the third quarter, KCCB was home to 48 bonds with a modified duration of 1.84 years. Low default rates also bolster the case for KCCB.

“China’s bond market may be poised to deliver high yields in a yield-deprived global environment. High yields and an abundance of quality bonds with low default rates may make this market attractive to global investors,” according to KraneShares.