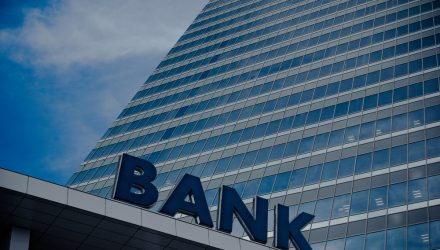 It May be Time to Bank on Bank ETFs

The SPDR S&P Bank ETF (NYSEArca: KBE) and the broader Financial Select Sector SPDR (NYSEArca: XLF) are among the financial services ETFs that are scuffling this year due to low interest rates and rising loan loss reserves, but there are signs bank stocks could be ready to turn for the better.

Banks are typically more sensitive to consumer and business spending so the stocks were among the heaviest hit during the coronavirus-related economic slump. Furthermore, as U.S. Treasury yields started to inch higher, banks also picked up the pace. Some analysts believe there’s more upside to be had with bank ETFs.

As recently as late May, more than half of domestic banks were trading below tangible book value – the book value of its common shares, less intangible assets, such as loan servicing rights, goodwill, and deferred tax assets. Among the 11 S&P 500 sectors, the financial services sector has been this year’s second-worst performer, or just ahead of the hardest hit energy.

“During the year’s first half, 12 of the largest U.S. banks set aside $72 billion in loan-loss reserves, more than doubling the reserves set aside at the end of 2019, according to data from UBS. In some cases, those reserves turned would-be profits into losses,” reports Carleton English for Barron’s.

Reserves Could Turn Into Profits

The problem with banks setting aside large chunks of cash to cover bad loans is that the strategy weighs on earnings. Those reserves come directly out of profits, but if the economy improves, KBE holdings may not need to cover as many bad loans as expected, meaning those reserves could eventually be turned into profits.

“Yet, banks might be reserving more than the losses they eventually will incur. On second-quarter earnings calls, many bank executives hinted that their reserve builds were likely to peak in the second quarter,” according to Barron’s. “JPMorgan Chase (JPM) executives noted that the bank leaned a bit more on downside scenarios when building its reserves. Even if the banks’ dour economic projections come true, the accounting treatment of those reserves might permit them to be released into earnings once the economy improves and losses are covered.”

Deutsche Bank upgraded both JPMorgan Chase & Co. and Bank of America Corp., predicting that bank stock performance is about to take a turn for the better after falling behind amid pandemic-induced revenue concerns due to low interest rates and weak loan growth, along with credit concerns, Bloomberg reports.