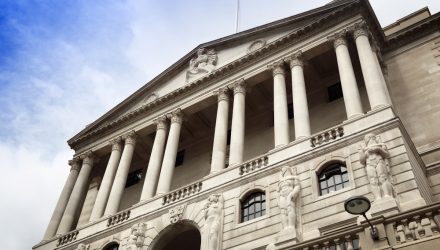 The SPDR S&P Bank ETF (NYSEArca: KBE) and the broader Financial Select Sector SPDR (NYSEArca: XLF) are among the financial services exchange traded funds that are taking flight amid the value resurgence and these ETFs are also finally getting some help from the Federal Reserve.

Due to the coronavirus pandemic, the U.S. central bank earlier this year prevented big banks from boosting dividends and continuing buyback schemes, two of the primary reasons to own the stocks and ETFs such as KBE and XLF. After a long slog, it appears the Fed is coming around and that’s the benefit of KBE of XLF investors.

“The Fed eased restrictions on the banks’ shareholder payouts for the first quarter of 2021, specifically by allowing share repurchases that had been suspended since late in first-quarter 2020,” according to the research firm. “Some banks have already announced repurchase programs following the publication of the Fed’s results. The Fed delayed until 31 March 2021 any decision on whether to alter the stress capital buffers established for the banks following the June results.”

Earlier this year, many KBE and XLF components were forced to set aside billions of dollars to cover bad loans owing to the weak economy.

The problem with banks setting aside large chunks of cash to cover bad loans is that the strategy weighs on earnings. Those reserves come directly out of profits, but if the economy improves, KBE holdings may not need to cover as many bad loans as expected, meaning those reserves could eventually be turned into profits.

If the economy improves, KBE holdings may not need to cover as many bad loans as expected, meaning those reserves could eventually be turned into profits. Importantly, the big banks are currently well-capitalized.

“The Fed’s stress test evaluates banks’ resilience to different recession scenarios by estimating their earnings, loan-loss provisions and capital levels over nine quarters, from the third quarter of 2020 through the third quarter of 2022,” according to Moody’s. “A sizeable increase in loan loss reserves at US banks during the first half of 2020provided them with a larger buffer to absorb the more severe stresses in this round. As a result, the banks’ declines in capitalization under the December scenarios, as measured by the Common Equity Tier 1 (CET1) ratio, were similar to their June results despite the more severe stress.”