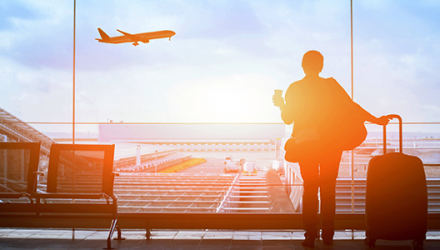 If you were hoping to visit the Eiffel Tower or Colosseum this summer, you may be in luck. European Commission officials proposed on Monday that member European Union (EU) states should start allowing fully vaccinated foreigners to enter for “non-essential reasons.”

For months now, I’ve been saying that the EU represents the next leg in the recovery of commercial air travel. With the 27-member bloc ready to begin receiving international tourists, it may be time for investors to act.

Here in the U.S., domestic leisure travel has largely rebounded thanks to an aggressive vaccine rollout, and many carriers are capitalizing on the pent-up wanderlust by announcing new summer routes to popular vacation destinations. American Airlines in particular is betting big on summer, with 150 new routes available to travel-starved Americans starting next month. Ninety percent of its seat capacity will be open compared to summer 2019.

European airline stocks, meanwhile, have struggled to get off the ground with the EU still off-limits to visitors from all but seven countries, including Australia and Singapore. The news of relaxed travel restrictions, I believe, signals an incredible buying opportunity, especially for low-cost leisure-focused carriers.

Among our favorites are Hungary’s Wizz Air, Ireland’s Ryanair and the U.K.’s easyJet. We like them for their ability to generate strong revenues from ancillary, or non-ticket, fees (think extra legroom, WiFi, hotel accommodations and more). In 2019, ancillary revenues represented a whopping 45.4% of Wizz Air’s total revenue, 4.3 percentage points higher than the previous year, according to consulting firm IdeaWorks. Ryanair’s ancillary revenues were 34.5% of total revenue; easyJet’s, 21.6%. For comparison’s sake, major long-haul carrier Lufthansa generated only 8% of its total revenue from ancillary means.

EU Vaccine Rollout Expected to Improve After Lagging Other Economies

The EU’s reopening comes as its vaccine rollout “turns the corner,” according to the Wall Street Journal. Up until now, the number of vaccinations as a share of its populations has very much lagged those in the U.S., U.K. and Israel. As of May 4, less than 10% of people in the EU were fully vaccinated, compared to 23% of Brits and 32% of Americans.

But thanks to bigger deliveries and less bureaucracy, the EU is finally catching up. In the June quarter, the region is expected to receive 400 million doses of various approved vaccines, more than 3.5 times as many doses that were delivered in the March quarter, the WSJ writes.

If the trend continues in this direction, the EU could very well resemble the U.S. in the coming weeks, in terms of its ability to keep the economy open and running on all cylinders.

Some tourism-dependent EU member states have jumped ahead of the line to welcome international travelers, regardless of vaccination status. Greece, for instance, whose tourism industry accounts for more than 20% of gross domestic product (GDP), is mostly open to overseas visitors already, as are Croatia and Cyprus. This week, Italian Prime Minister Mario Draghi urged tourists to start booking their summer vacations to Italy now, in anticipation of the launch of a travel pass in mid-May, earlier than the rest of the EU.

On the plus side, other industries are currently surging at a record pace. In April, the IHS Markit Eurozone Manufacturing PMI, a leading indicator of economic strength, clocked in at 62.9, the highest level on record.

“The past two months have seen output and order books both improve at rates unsurpassed since the survey began in 1997, with surging demand boosted by economies opening up from COVID-19 lockdowns and brightening prospects for the year ahead,” writes Chris Williamson, chief business economist at IHS Markit.

Here’s to a second wind for the global airline industry!

Originally published by US Funds, 5/5/21

The Dow Jones U.S. Airlines Index measures the performance of the portion of the airline industry which is listed in the U.S. equity market. STOXX Europe Total Market Airlines Index measures the performance of airline stocks listed in Europe. The Eurozone Manufacturing PMI is produced by IHS Markit and is based on original survey data collected from a representative panel of around 3,000 manufacturing firms.

Holdings may change daily. Holdings are reported as of the most recent quarter-end. The following securities mentioned in the article were held by one or more accounts managed by U.S. Global Investors as of (03/31/2021): Wizz Air Holdings Plc.