You are at:Home»ETF Building Blocks Channel»Don’t Miss Out on Rampant Biotech Mergers with the SBIO ETF 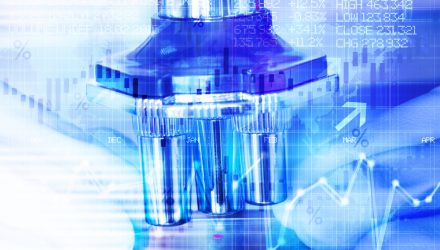 Large cap biotechnology companies are flush with cash, and they’re on the prowl for takeover targets, a scenario that could bode well for the ALPS Medical Breakthroughs ETF (SBIO).

“The first two weeks of the year already produced four large tie-ups in health care, and the JPMorgan Healthcare Conference, which kicked off Monday, has typically lent itself to deal news. Wall Street’s anticipation comes as a bevy of heavyweights need to refill their portfolios ahead of expiring patents and emerging competition,” reports Baily Lipschultz for Bloomberg.

SBIO is one of the original exchange traded funds dedicated to small- and mid-cap biotechnology stocks. Alone, that trait enhances the fund’s relevance in a brisk takeover environment, but there’s more to the story.

SBIO is frequently home to credible takeover targets because its components must have drugs in Phase II or Phase III trials and the its holdings must have enough cash to survive at least two years at current burn rates. Either of those traits or a combination of the two make for alluring investment opportunities.

“Biotech mergers should pick up steam this year as cash-rich companies whose shares stumbled through 2020 — like Amgen Inc. and Gilead Sciences Inc. — look to replenish wavering pipelines,” adds Bloomberg.