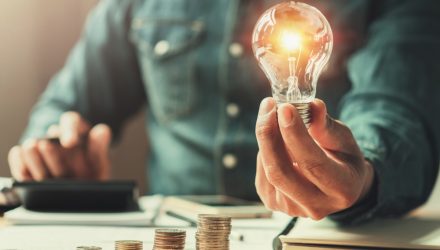 NFRA tries to reflect the performance of the STOXX Global Broad Infrastructure Index, which identifies equities that derive the majority of revenue from infrastructure business, providing exposure to not only infrastructure sectors, but non-traditional ones as well. Investors considering NFRA or any other infrastructure asset are betting this time will be different when it comes to policy execution and implementation.

It was thought Biden would take a hard stance against fracking, but with that a vital industry in some swing states, he’s softening his tone.

“The growth of the U.S. fracking industry, which relies on new technologies to extract oil from shale rock and other hard-to-reach locations, began in earnest during the Obama administration,” reports Patti Domm for CNBC. “Biden is expected to allow it to continue, but Democrats might be tougher on pipelines and other permitting.”

Still, there are plenty of avenues on which NFRA could be an ideal post-Election Day play.

“Deutsche Bank analysts said infrastructure plays, such as Caterpillar, Cummins, CNH Industrial, Deere and Oshkosh would benefit since Biden would like to upgrade and repair crumbling transportation infrastructure, including ports, roads, bridges, aviation and rail,” according to CNBC. “He would also like to electrify the rail system and provide light rail networks for smaller cities and improve transit and bus lines.”

NFRA is in the election year spotlight, but there’s more to the story for infrastructure as an asset class and that’s to the benefit of long-term investors.

Biden plans to use all the levers of the federal government, from purchasing power, R&D, tax, trade, and investment policies to position America to be the global leader in the manufacture of electric vehicles and their input materials and parts,” Deutsche analysts wrote.